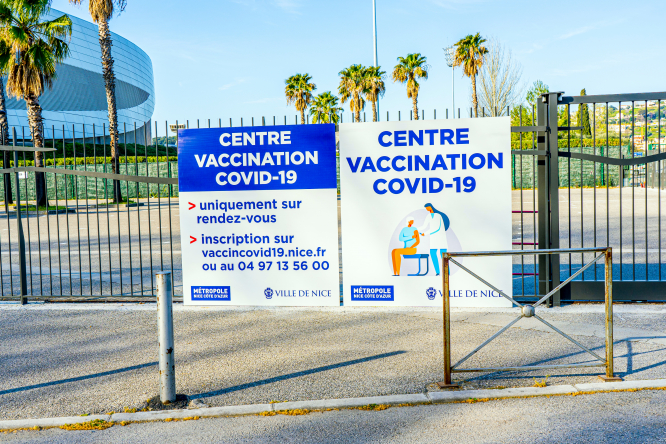 A sign for a Covid vaccination centre in Nice Pic: Elinaxx1v / Shutterstock

All Nice residents aged 12 and over will be able to get a booster Covid shot from December 1, the city’s mayor Christian Estrosi announced yesterday (November 22).

He said that people will be able to go to one of three vaccination centres between 17:00 and 18:00, and if spare doses are available they will be able to receive a booster shot.

The vaccination centres are the ones on Rue Hancy (only for people with reduced mobility), at Quai Lunel and at the Théâtre de Verdure.

Nice is located in the Alpes-Maritimes department on the French Riviera in the southeast of the country. The latest data from Santé Publique France shows that 11.1% of people in the department have received a booster dose as of November 18, compared to 7.8% nationally.

The national government has not yet authorised a similar measure to use spare doses to offer booster shots.

France’s health service quality regulator the Haute Autorité de Santé (HAS) recommended on November 19 that booster doses be given to everyone aged 40 and over. In a report, the HAS said there was not yet enough available data to recommend a booster dose for the general population.

President Emmanuel Macron announced on November 9 that the booster dose campaign would be expanded to include everyone aged 50 and over from the beginning of December.

It is not yet clear if people in Nice will also have to wait six months after their second dose to get a booster dose through Mr Estrosi’s proposed system, although this is expected to be the case.

From December 15, all over 65s will need to have had a booster dose six months and five weeks after their second jab in order for their vaccination certificates to remain valid with the health pass (pass sanitaire) system. The five weeks is to give people time to find an appointment.

Everyone who received the Johnson & Johnson vaccine, regardless of age, needs a booster dose within two months of their first shot for their health pass to continue to be valid.

Read more: France mandatory Covid booster jab from December: Who does it concern?

In a report published November 20, the Conseil scientifique, which advises the government on Covid-related matters, stated it was in favour of considering a booster dose for the general population in France.

“The Conseil scientifique supports the recommendations of the Conseil d'Orientation de la Stratégie Vaccinale (Vaccine Strategy Steering Committee) on the fact that the evolution of the epidemic invites the consideration of a booster vaccination for the entire adult population six months after the primary vaccination,” it stated.

President Emmanuel Macron has previously said that he “wouldn’t be surprised” if booster shots were offered to all adults at some stage, Le Monde reports.

“It’s the way things are going,” he said.

Authorities in the US last week gave the green light for booster shots to be given to all adults.