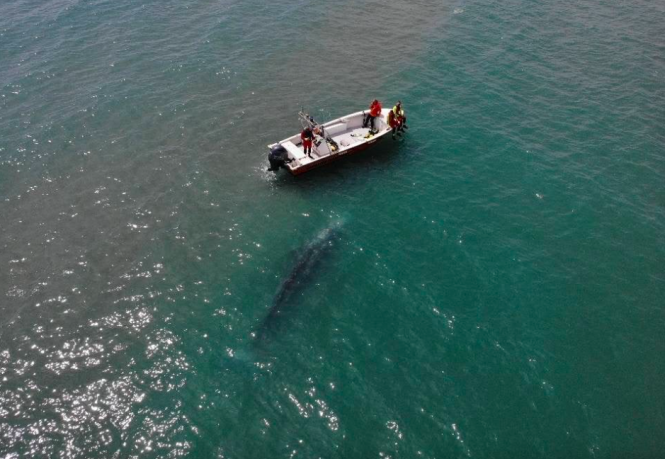 Firefighters helped guide the whale away from the coast and into open seas yesterday Pic: Sapeurs-Pompiers de l'Hérault - SDIS 34 / Facebook

Scientists are hopeful that a young grey whale lost off the south coast of France is starting to find its way home, as it has recently been spotted off the Hérault coastline.

The animal has been tracked since it appeared in seas in the south of France last week. Prior to the most recent sighting, it was last seen on April 30, near Bormes-les-Mimosas (Var).

After this it disappeared for a few days.

It was seen again yesterday (May 5) near Palavas-les-Flots in Hérault, where firefighters intervened to encourage the animal towards open seas.

The most recent sighting indicates that the whale may have begun a long journey home, which would entail travelling west along the south French coast, then following the Spanish coast south before entering the Atlantic via Gibraltar, from where it could return to its normal habitat off the Pacific coast.

However, the animal is in poor health. When it was seen yesterday scientists reported it was injured and had lost a lot of weight as it cannot feed properly in the unfamiliar Mediterranean environment.

Still, they are hopeful the whale will continue its journey along the French coast, arriving today in the natural marine park which starts along the Aude coastline and extends down into northern Spain.

Director of the park Hervé Magnin said: “The whale must travel along the coast, which is normal behaviour for grey whales. Our team is mobilised and will be in the water to accompany it by securing a perimeter to stop it being approached out of curiosity!”

Mr Magnin said scientists had taken a sample of fat from the animal as part of wider efforts to track aquatic mammals in the Mediterranean.

He said the whale, nicknamed Wally, had been swimming west at a speed of two knots, and could reach Spanish waters by Friday.

As for the animal’s health, he said: “If it continues this journey, and has the strength, it could reach Gibraltar - but its survival is not guaranteed. When the fat sample was taken, it was still breathing regularly and was making progress.”