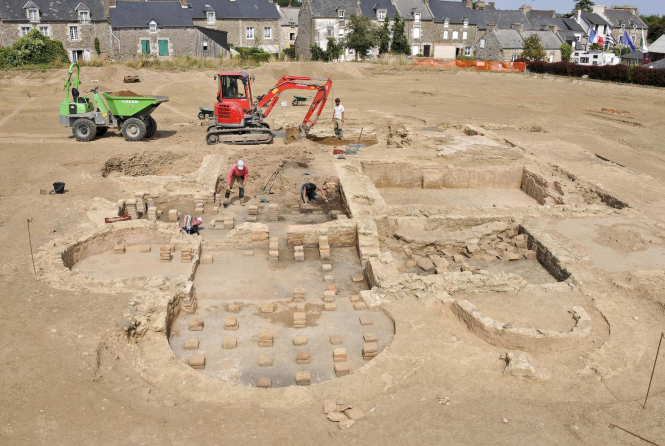 A LARGE Gallo-Roman villa has been uncovered in Brittany, on the site of a planned housing development - and councillors have delayed the project to preserve the site.

The remains of the impressive building - which features the largest private thermal baths ever found in the region - were uncovered by archaeologists with the Institut national de recherches archéologiques préventives (Inrap).

Discovered on a site on the banks of the river Rance at Langrolay-sur-Rance, Côtes-d’Armor, 14km from Dinan, the villa alone was 1,500m2 and the grounds would have covered several hundred hectares.

The building, arranged in a U shape around a central courtyard, with colonnaded galleries and outbuildings, has been dated to the fourth century AD.

Its 400m2 baths are its outstanding feature with a footbath and then two large swimming pools, one hot and the other cold, plus three smaller pools. Around the pools are rooms for a sauna-like hot-room and massage rooms where temperatures were kept high through under-floor and in-wall heating pipes.

Inrap archaeologists say the villa would have belonged to a rich noble family of the Coriosolites tribe and it has given valuable information on decoration styles in such buildings.

The walls and ceilings of the baths, exceptionally well preserved, were decorated with paintings, including plaster shell inlays, a feature of the area. So far only small fragments have been found before in about 30 sites and the villa now offers an unprecedented collection for research of a style that developed from the third century.

The site was due to be flattened and then handed over to the developers at the end of this month but Langrolay-sur-Rance councillors have decided to preserve the baths and has put a hold on construction while it looks at how best to proceed. In the meantime, the archaeological works are to be filled in to maintain their condition.