Hundreds of doctors 'resign' in France in new protest 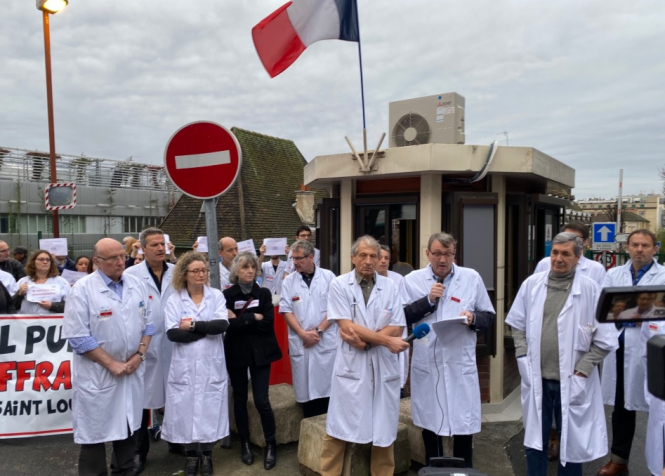 Symbolic, partial resignations have been reported at hospitals in cities including Paris, Marseille, Rennes, and Caen; with senior doctors abandoning managerial and administrative tasks (although patient care has still been maintained).

Staff are also calling for a new nationwide protest on February 14, a move that is supported by hospital unions at the CGT, FO and CFDT.

At one hospital in Paris, Saint-Louis - from which around 20 doctors have resigned - haematologist Hervé Dombret denounced “budgetary restrictions affecting the hospital for more than 10 years”, and told the Agence France-Presse: “If we do not shout, they do not hear us; they do not even think about us.”

According to national protest group le Collectif Inter-hôpitaux (CIH) - which is coordinating the action - around 36 doctors have walked out in the afternoons at hospitals in Caen, while in Marseille, 64 have "left". In Rennes, 54 doctors handed in letters of "resignation" in just one day (January 27).

One lung specialist, Hervé Léna, said the doctors are protesting against “the global reduction in healthcare financing, and tasks that continue to pile up, without the resources for them”.

At the Kremlin-Bicêtre hospital group in Val-de-Marne, 56 doctors walked out from six hospitals south of Paris; and in the north-east of the city, there were 27 "resignations" recorded at the Robert-Debré children’s hospital. Staff also made a “human chain” around the building.

One paediatric nurse said: “Unfortunately, the government does not have a cure [and I am] not far off burnout. Nurses will be the next people to jump ship [after the doctors].”

The action comes 10 months after emergency doctors first went on strike to denounce conditions in accident and emergency departments, with thousands marching in protest in November 2019.

In response, the government promised extra grants, a budget extension, and the writing off of debt.

But many doctors said the response was “too little, too late”, and last month CIH “solemnly alerted” health minister Agnès Buzyn that they would "resign" in protest at the inadequacy of salary “negotiations, financing method, and governance” of the sector.

CIH representatives said that they “were not able to obtain a response” and therefore called “to continue the movement, for an emergency plan worthy of its name”.

On Sunday February 2, the CIH said it had received word that 1,266 doctors “planned to resign”, with almost 200 having done so already by last week, in cities and towns including Rennes, Paris, Lyon, Orléans, Douai, Salon-de-Provence, and Dax.

This week, "resignations" have come from Brest, Nantes, Avignon, Annecy and Corbeil-Essonnes, with more set for Grenoble, Toulouse, and Limoges later this week.

Health minister Ms Buzyn has responded to the action saying that the subject is “on the agenda more than ever”, and that her “priority is to implement the measures announced”, including new grants created by decree on Friday January 31, for elderly care workers, and nurses in the Paris area.