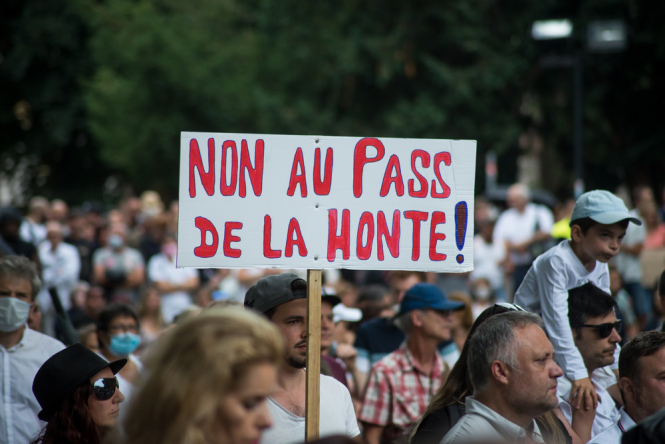 There have been protests against the health pass in France for the past three weekends Pic: NeydtStock / Shutterstock

Several hundred restaurant owners in France have stated that they will not check customers’ Covid health passes from Monday (August 9) when a new law requiring people to show them to enter restaurants, cafes and bars comes into force.

France’s highest constitutional authority, the Conseil constitutionnel, approved the extension of the health pass to these places in a decision on Thursday (August 5). It was the final seal of approval for the government measure, first announced by President Emmanuel Macron on July 12.

A health pass, which is proof of vaccination, proof of a negative Covid test taken within the past 48 hours, or proof of having been positive with Covid 11 days to six months before, is already required to enter museums, theatres, cinemas, public swimming pools and some other venues that can host over 50 people.

But several restaurant owners in France have said they will not apply the law.

Margot, owner of a bistro in Ploéven (Finistère), said she would not be asking customers to her restaurant to present the pass.

“For the moment, we have decided to say that we are against it, and we are looking for legal means not to apply it,” she told Franceinfo.

At her bistro, La Mère Margot, the customers are mainly locals.

"I can't see myself refusing entry to my regulars. I have no desire to become the controller of our regular customers,” she said.

Margot is one of 43 restaurant owners in Brittany who have declared themselves against imposing the health pass on customers. Their motto: "Our job is to welcome, not to select”.

In Belvédère (Alpes-Maritimes), Florence has been running the Café des Tilleuls for many years. Her cafe is small, to the point that "Flo", as her regulars call her, is alone in the kitchen.

She only has one waitress.

"Even if I agreed to it, I don't have the time to check the health pass, and neither does my waitress,” she said.

“I really hope that many of us [restaurant owners] will refuse this health pass."

Olivier, owner of the cafe La Scierie in Montperreux (Doubs), is of the same opinion.

“If they close my business, I don't care," he said.

“It's been two years since I started it. If I have to close, I will have the satisfaction of having defended my ideas to the end.”

The 54-year-old has had Covid-19 twice and says it was like a bad flu, but does not feel it is his place to inspect other people’s Covid status.

"I'm not a policeman, I'm not a doctor. What right do I have to allow such and such a person to enter my establishment? It's not for me to judge.”

Around 100 restaurants have responded to a call by a French collective, whose mission statement is that defends fed up restaurant owners and artisans, to reject the health pass.

“Neither cops nor thugs, we want to work with dignity without being forced to select,” the collective wrote on Twitter

Protests “for freedom” and against the “health dictatorship” are planned for today (August 7) in over 150 towns and cities in France.

It will be the fourth weekend in a row demonstrators have gathered since the health pass was extended to certain culture and leisure venues on July 21.

Each weekend has seen more people take to the street, with over 200,000 gathering last Saturday.

A majority in France in favour of new health pass rules

Despite the protests, a majority of people in France say they have no problem showing a health pass to enter public spaces, no matter the location, a recent poll published on Wednesday (August 4) shows.

Between 19 and 23% of people polled said they would not be prepared to show the health pass in varying situations.

The study surveyed 1,000 people aged 18 and over around France. It was carried out by Elabe for Les Echos, Institut Montaigne et Radio Classique.

Shopping centres, hospitals: What are rules for French health pass?