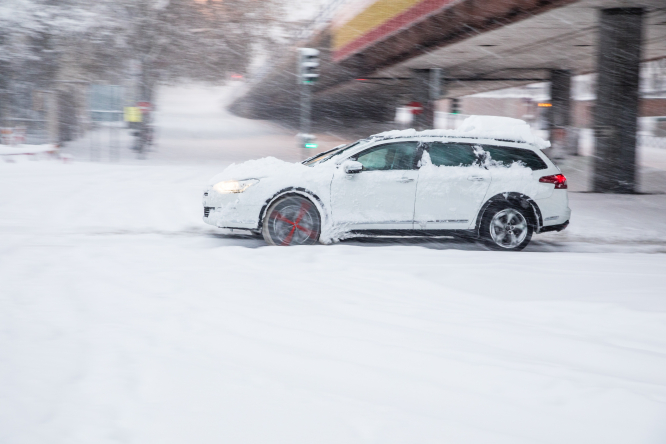 The three departments (Deux-Sèvres, Indre and Vienne) were placed on red alert – the highest alert level - for freezing rain from 04:00-16:00 today. Despite the recent upgrade in status to orange, difficult driving conditions still exist in multiple regions of France.

Forecaster Météo France said “notable amounts of freezing rain” will fall in west France starting in Brittany, then moving towards the north of the Massif Central, with the three departments expected to experience six or seven-hours of icy rainfall.

It said: “Freezing rain in Brittany will reach Poitou and the south of the Centre-Val de Loire region overnight, making roads icy and very dangerous.

Heavy goods vehicles over 3.5 tons have been banned from driving on motorways in the red alert departments and traffic restrictions are in place on the A83, A87, and the A10.

While smaller vehicles can still use motorways they must respect a 70kmph speed limit and are banned from overtaking. The motorways were treated with salt in advance of the bad weather, but travelling in difficult conditions is still not advised.

Nicolas Durvaux, regional director west France for Vinci Autoroutes, told news source BFMTV this morning: “With a red alert from Météo France that it is strongly advised to avoid driving. Freezing rain is a unique weather phenomenon. On the road it is difficult to know whether it’s rain or ice falling.

"If you live in a department that has a red alert warning, our advice is not to drive on the motorways this morning.”

He said the driving conditions were currently expected to become easier later in the day.

Early this morning, 300 workers were deployed to salt major and secondary roads in the area to make them safer for drivers – but conditions may still be difficult.

Dominique Lemesle, manager in charge of urban services territories in Lyon, spoke to local news source BFM Lyon from a salt depot in the city this morning.

He said local drivers should stay at home today, if possible. He said: “Even if you can go out in the morning, it might be difficult to get home later in the day. If possible, people should work from home.”

Plans are in place to maintain local public transport links throughout the day, but users should be aware that journeys may be heavily affected by the poor weather conditions.

Temperatures as low as -14C have also been forecast in the Auvergne-Rhône-Alpes region.

Grand Froid alerts continue - but this is no cold snap

France still on alert for snow and ice amid -18C conditions