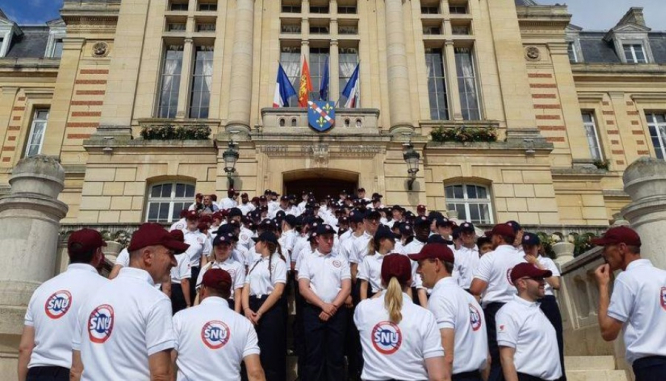 The incident happened on Wednesday June 19, during an official ceremony in the new Place du Général-de-Gaulle, in Evreux (Eure, Normandy), after the new members were required to stand outside for a long time in temperatures of around 30°C.

Some fainted, and others suffered from dizziness and heatstroke, emergency services reported. One was taken to hospital - although the prefecture said this was due to an unrelated issue.

Now, Secretary of State for the Army, Geneviève Darrieussecq, has said that “there was no lack of supervision” among the young people.

She said: “There was one supervisor for every five young people, and they had all received training. This is not a local error, but a question of circumstances: a very hot location, where the young people started to feel ill.

“The Service National Universel (SNU) supervisors took these young people to shelter, and gave sugar to those whose levels had dropped. I am not minimising what happened, but the right things were done.

“This was a specific situation, with a ceremony with very long speeches, in a very hot space...There was no lack of consciousness, but some did not feel well. They were brought inside, into the shade. Some drank water, some ate. They were taken care of. This was a problem of heatstroke.

“All of the young people continued their [normal] activities in the afternoon and evening.”

The Evreux mayor also sought to play down the incident.

A former doctor, he said: “It was just a bit of heatstroke, which we see often. But it was difficult to imagine that the young people would feel unwell. I saw two or three who were especially seriously affected.”

A prefecture statement added: “[The issues] were caused by exceptionally high temperatures, and the emotion linked to the solemn style of the ceremony, when the young people were singing [national anthem] La Marseillaise.”

But student nurse Jérémy Dojwa, who was among the first responders on the scene, said: “When I arrived, we started to take care of four or five of them who were really suffering, and around a dozen who were dizzy and hot. But then the other emergency services arrived, and they started to fall, one by one."

He added: “I was told that the young people had to stay in the sun during the entire ceremony. That is completely scandalous. During this time, speeches were going on as if nothing was happening. It was shocking.”

The young people are among the first to take part in the new SNU scheme, which was a key election promise from President Emmanuel Macron.

It is currently voluntary - with 2,000 volunteers having begun their training on June 16.

It is expected to become mandatory for all young people aged 16 and above by 2022-23, and include a month’s training in culture, defence, and the environment, as well as at least two weeks as part of a uniformed brigade.