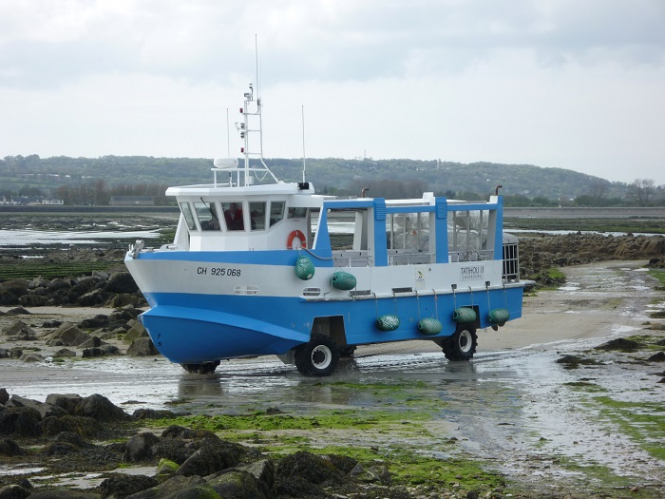 Tatihou’s amphibian ferry, off and on water (below)
By Connexion journalist

Tatihou II has wheels, which allow it to cross the two kilometres of causeway, through oyster beds, linking it to the mainland at low tide. At high tide, it floats over, taking a shorter 1km route.

Built as a one-off in 2008, in the Proteau shipyard at Marennes Oléron in Charente-Maritime, the ferry has two 150 HP diesel engines, powering either a propeller or the wheels.

The captain “drives” the boat using controls similar to a land vehicle when it is on wheels, before switching to marine controls.

Philippe Auvray, who has been captaining the boat and its predecessor Tatihou I since 1995, said: “Once you have been doing it for a while, there is nothing very special about it.

Once you sense the wheels starting to lose traction, you push the buttons to raise them, and the propeller takes over.

“Similarly, when the water starts to get shallow, you lower the wheels and feel them start to bite and stop the propeller.”

As a boat, the maximum capacity is 58 passengers, while 65 can be carried if the wheels are used.

The low-lying island has been used as a fort, military jail and juvenile prison in the past. Now it has a bird reserve, museum and gardens.

Visitors can only stay for the day, unless they are part of pre-booked groups using a conference centre on the island.

The ferry usually runs from March to November and tickets can be bought at Saint-Vaast-la-Hougue.