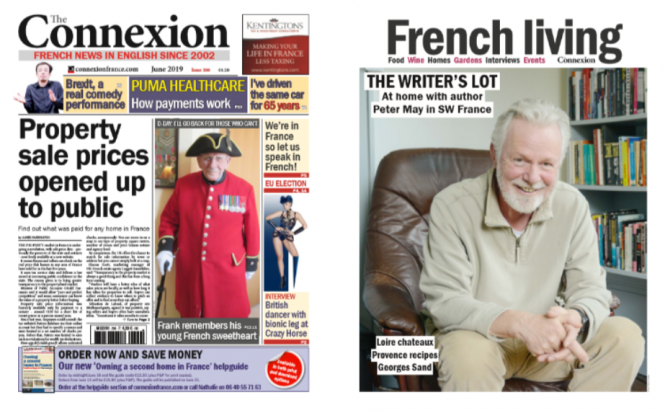 The June edition of Connexion has been delivered to subscribers and is available in shops.

A good night for Europe but also for Brexiteers
Low-cost post option blamed for postal vote delays
OPINION: People across bloc must see their destinies lie together
Britons ‘should have known Leave date could be pushed back’
Training course on the impact of Brexit for Britons in France
Brexit - The real-life comedy
No-deal Brexit looms larger following PM Theresa May's resignation
Cartes de séjour hope for British family told to leave France

INTERVIEW: D-Day hero remembers his mademoiselle from Armentières
Parachute drop is the highlight of D-Day 75th anniversary commemorations in Normandy
Poignant D-Day events in France may be last for many veterans

‘Bionic Showgirl’ dances in Crazy Horse cabaret
France faces a long summer of drought
Asian visitors boost tourism numbers in France
When in France, customers want to speak French
Snakes on the plains - and what you need to do if you are bitten
France is to start medical cannabis trials this year
Teenagers demand urgent action to save environment
British barbecuers challenged to put their skills to the test at French championship
Loving grandfather takes on a million-step challenge
Fundraising cyclist sets himself a 2019 target of 15,000kms
Green-fingered friends open five French gardens for charity
Meet the French rural garage owner who loves British cars

Carte vitale card is to be replaced with an app
How - and where - you can get free legal advice in France
Make sense of ... France's Puma healthcare system
Shortages of medicines putting patients at risk
The form you need to complete if your children are travelling outside France without you
Challenges in the French education system for the cleverest pupils
Breaking the dyslexia barrier with a smartphone app
New contrôle technique gives diesels a hard time
Has state reimbursement for hearing aids improved?
Will Britons still be able to travel in European Schengen zone after Brexit?
Am I insured if my dog bites someone?

Now you can find out what was paid for any home in France in the past five years
What every self-build dreamer needs to know - by those who have done it...
City’s Baroque jewel is hidden behind a simple street facade
Property watch: Poitou-Charentes
Learn the language of bricolage
Cheaper mortgages make buying easier

Why 'dead cert' fonds en euros are no longer a good bet
Mutuelles targeted to boost spending power
Will charity pay tax on my gift if I make a bequest?
Only 10% of people make wills in France
UK pension options should be reviewed for life in France
Why second-hand cars are so expensive in France
Why you cannot renegotiate a prêt viager rate
The criteria for a reduction in taxe foncière

European vote puts Macron on poll for 2022 re-election, but his future is far from rosy
The super-shy immigrants to France who should be made welcome
The dangers of France's child-sharing custody system
When it comes to drinking, the French are real pros

100 years after World War One ended, soldiers still need a dignified burial
Dream coming true to build Sun King’s flagship
Artisan life and artistic loves of an ‘accidental’ glass blower
Open Gardens: June in full bloom
What's On across France this month
INTERVIEW: At home with crime author Peter May
Food and Drink: The delicious taste of Provence
In season: why artichokes are top of the crops in June
Second-hand is the new black - the fashion for jumble sales and vintage shops
Profile: George Sand - the unorthodox literary heroine 19th-century France needed
Chateaux-filled Valley of the Kings marks France’s historic Renaissance links
The remarkable independent history of an unassuming French village

+ 10 pages of businesses and tradespeople serving English-speakers in France

To pick up your copy of June's edition of Connexion

Subscribe here and read the edition online immediately (mobile and tablet friendly) + receive a complimentary PDF of the edition. Your print editions will start with the July edition. Subscriptions start at €13.50 for 3 months to a French address