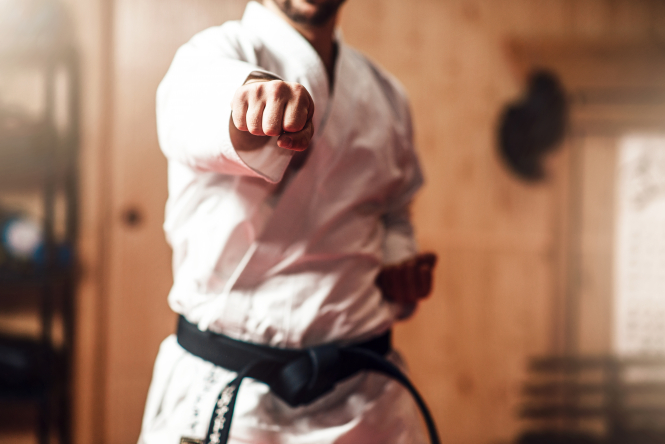 Having appeared at the Olympics for the first time at Tokyo, karate will not be returning to the Paris Olympics 2024 Pic: Nomad_Soul / Shutterstock

Karate will not be returning to the Paris 2024 Olympic Games - to the disappointment of France’s Tokyo gold medal winner, Steven Da Costa, who regrets not having the chance to defend his medal.

Karate appeared for the first time ever on the Olympic sports list for Tokyo 2020, after a long battle dating back to the 1970s and launched by French Olympic Committee member and founder of the European Karate Federation, Jacques Delcourt.

Da Costa, 24, won the sport’s first Olympic gold medal for France on August 5, before being chosen as the country’s flagbearer at the Tokyo Games’ closing ceremony.

Despite this, the Paris 2024 organising committee has not opted to bring karate back for its second Olympic appearance, citing limitations on the number of sports it can accommodate.

Reacting to the news, Da Costa tweeted: “I trained relentlessly. I became the favourite to win. I brought the gold medal back to France. I carried the French flag with pride. I was on cloud nine. Waking up hurts.

“In 2024, with your support, I want the chance to defend my Olympic title in Paris.”

His words have been endorsed by French minister for sport, Roxana Mărăcineanu, who said that she was “sad that [Tokyo] would probably be [Da Costa’s] last Olympic Games.”

Why has karate been dropped?

As this year’s Games drew to a close, the World Karate Federation President, Antonio Espinós, expressed his hope that the sport would be included again in the line-up for Paris 2024.

“We definitively showed the world that karate is a unique sport and we demonstrated the merits that we have acquired to be added to the Olympic programme as a permanent sport,” he said.

“In the same way that karate needs the Olympics, the Olympic Games need karate.”

“We will improve as a sport better and faster inside the Olympic movement than outside of it. After our success in Tokyo, the International Olympic Committee should show solidarity to consider karate as a permanent Olympic sport,” Mr Espinós added.

However, in an interview on August 9, president of the Paris Olympic organising committee, Tony Estanguet, confirmed that karate would not be coming to the 2024 Games, adding that “we have looked for sports that are currently trending on social media and that are really popular among young people.

“Sports like surfing and climbing bring something truly spectacular and different to the sports that are already on the programme.

“It is a shame that karate will not be at Paris 2024, because Steven Da Costa is a huge champion who was very strong and impressive in Tokyo, but unfortunately it is the committee’s responsibility to maintain the balance between the solemnity and the spectacle of the Games.”

Any lingering hope that karate would return to the Paris Olympics was extinguished by the comité d'organisation des Jeux de Paris 2024 in a statement released on August 12.

“Since December 2020, the programme of events for the 2024 Games has been final and can no longer be modified,” it said.

“For Paris 2024, new rules have been put in place to limit the size of the Games.

“Therefore, the number of additional sports coming to Paris in 2024 will be four and not five, as was the case in Tokyo, with the number of athletes shrinking by more than half from 474 (including 80 karatekas) to 232.”

The committee added that the 2024 games will once again feature climbing, skateboarding and surfing - as in Tokyo - but that a break-dancing event will appear in place of karate and baseball.

“Paris 2024 understands wholeheartedly the disappointment of the Karate Federation [...] and will continue to work alongside it to promote the sport in France and across the world.”

It is not yet known whether karate will be brought back to Los Angeles for the 2028 Olympic Games.

How are sports selected for the Olympic Games?

The list of sports that are included in the Olympic Games is decided by the International Olympic Committee, whose Executive Committee proposes events to be voted in by its other members.

Events put forward for the Games are judged against 35 criteria assessing the value that the sport would add to the Olympics’ legacy, the sport’s popularity in the host country, the history of the sport and more.

Karate is by no means the first sport to have been added and then omitted from the Olympic list: Basque pelota, lacrosse and tug of war are just three of the other events that have previously been eliminated.

15 hours ago
5
Travel France: Are under 18s covered by parent's Covid vaccine status?