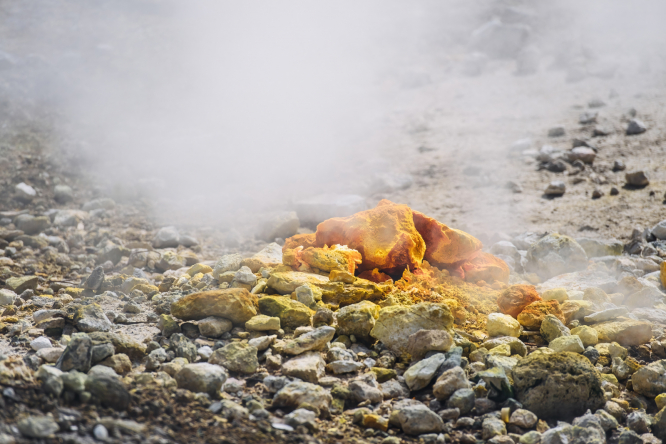 A sulphur dioxide cloud caused by a volcano eruption on the Canary island of La Palma will arrive in French skies this weekend, and is predicted to coincide with storms, resulting in more acidic rains.

The Cumbre Vieja volcano in Montaña Rajada began to erupt at 15:12 on Sunday (September 19) and has since forced the evacuation of around 6,000 people from their homes.

Drone footage shows homes being consumed by the lava flow at #LaPalma. Lava flows are slow enough to give us time to evacuate, but we can't stop them from bulldozing their way through anything in their path. Slow but devastating. pic.twitter.com/NXRMO9g48n

A small earthquake in the neighbourhood of Las Manchas, El Paso preceded the eruption, followed by a huge explosion and a column of smoke carrying airborne particles known as pyroclasts.

A cloud of sulphur dioxide has since travelled over Morocco and Spain, and is expected to reach France from Friday (September 24).

The Canaries’ volcanological institute estimates that the eruption could last “between 24 and 84 days,” with 6,000-11,500 tonnes of sulphur dioxide being released every day.

This sulphur dioxide reacts with water vapour in the atmosphere to produce sulphuric acid.

This could in theory be harmful for humans, animals and agriculture, as the acid can irritate a person’s skin and airways, causing coughs and asthma attacks.

There are storms forecast for mainland France this weekend, and their rains will be “accompanied by sulphur dioxide, and therefore sulphuric acid, making them a bit more acidic than they usually are,” BFMTV weather expert Christophe Person.

However, the acidity of this weekend’s rain will remain “quite weak because [the sulphur dioxide] has been dispersed,” according to Mr Person.

Mark Parrington, a researcher with the European climate observation programme Copernicus, added that “the impact of the sulphur dioxide released by Cumbre Vieja on weather conditions and air quality will probably be very slight.

“The majority of SO2 emitted is sitting very high in the atmosphere, and the further away from the source it travels the higher it gets.”

CAMS forecasts of SO₂ dispersion can help evaluating the possible impacts of a volcanic eruption like in #LaPalma. The impacts of SO₂ released by #CumbreVieja on weather & air quality at the surface are most likely very small.
More on CAMS' monitoring ➡️https://t.co/Q4OKXLEc03 pic.twitter.com/b4uvidKwj1

The Cumbre Vieja eruption – which is the first of its kind since 1971 – has not yet resulted in any injuries or deaths.