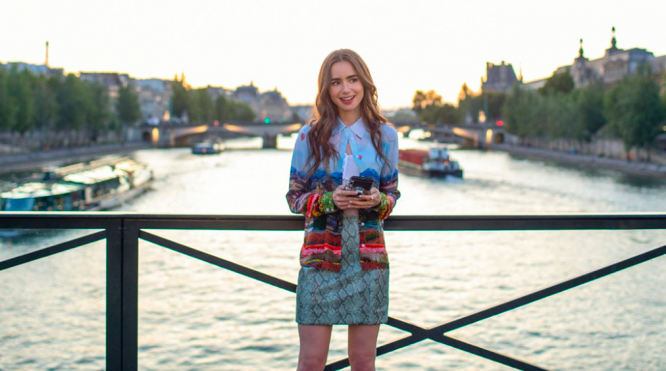 Filming is expected to last for three months and will see the return of many popular characters from the first season of the show Pic: @Variety_TV / Variety_TV / Twitter

The star of Emily in Paris, Lily Collins, has posted a video to social media announcing the start of filming for season two of the popular Netflix show.

Ms Collins, who is the daughter of British musician Phil Collins, was joined in the clip by multiple other actors who play Emily’s friends, colleagues and love interests in the show, including Ashley Park, Lucas Bravo, Philippine Leroy-Beaulieu, Samuel Arnold, William Abadie, Bruno Gouery and Camille Razat.

Actu Nice reported that filming for the second season will be taking place in Villefranche-sur-Mer and Grasse, in the south of France, from May 3-7.

Casting calls, which have now closed, were opened four days ago calling for 100 men and women living locally, aged 25-60 from a range of ethnic backgrounds.

Filming will also take place in Paris and is expected to last for three months.

Emily in Paris most popular comedy, despite criticism

Emily in Paris tells the story of a young American woman who moves to Paris to work in advertising, and quickly finds herself caught up in culture clashes at work, among friends and in her love life.

The show was released on Netflix in October 2020, to mixed reactions from critics who found fault with its depiction of Emily’s fairy-tale life in the French capital.

It went on to become Netflix’s most popular comedy show of 2020, with 58 million households around the world watching in its first 28 days on the streaming service. The show was also nominated for two Golden Globe awards in the US.

The Connexion spoke to the woman who was the real-life inspiration for the show in October.

American Rebecca Leffler works in marketing in Paris, and was invited into the writers’ room for Emily in Paris by the show’s creator Darren Star. In the second season she hopes to see Emily loosen up a bit.

She said: “I would like her to have more French friends and succeed at work but let herself go a little bit. It would be great to see her not be so aggressive.”

Netflix announced the return of the show with a note about Emily’s new assignment from her frosty, fictional boss, Sylvie.

It read: “We are writing to inform you that Emily Cooper’s new work permit has been approved with a start date of May 3, 2021… we hope that Emily continues to immerse herself culturally here in order not to make any egregious faux pas.”