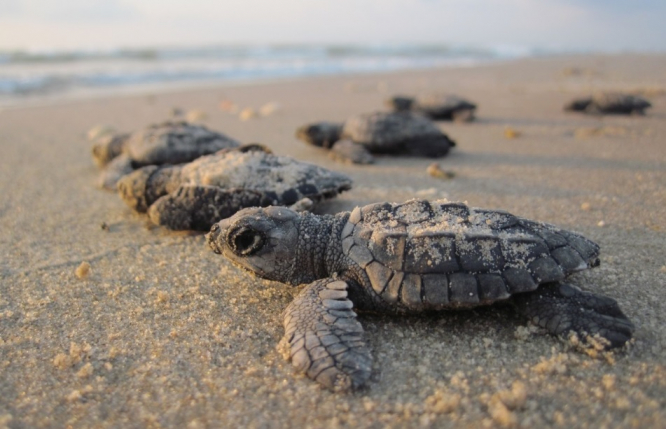 Turtle hatchings are very rare in France
By Connexion journalist

Specialists arrived on the beach soon after, to inspect the nests, and opened a small channel in the sand to allow the babies to get back to the water as quickly as possible (turtles typically hatch high up on a beach and then run down to the sea).

Four baby turtles were taken for extra care as they appeared especially weak, of the 63 counted in total.

Jean-Baptiste Sénégas, director of CESTMed, said: “Twenty years ago, [the walkers] probably wouldn’t have done anything. But today, with social media, we were alerted instantly.”

The turtles are now just four centimetres long and weigh 13g, but they will grow to a length of one metre and a weight of 150kg on average, and could grow as big as three metres and 450kg. They can live for up to 80 years.

Loggerhead turtles are one of the most common species in the Mediterranean, but do not usually hatch in France.

They are more likely to hatch in the eastern Mediterranean, especially in the Ionian Sea and islands such as Zakynthos in Greece; the Libyan coast; or Kuriat Island in Tunisia. Young turtles from Florida often come to the Mediterranean too.

Claude Miaud, local sea turtle researcher and specialist, said it was difficult to be sure what had prompted the hatching in France, but said it was more likely the result of protection measures put in place around the Mediterranean rather than climate change.

She said: “This is a very moving moment, but it is only one hatching. This is mainly due to the good work of the mother turtle, who placed her nest high up away from the beach, without being seen…[and] the hot temperatures of this summer allowed the nesting to go to term.”

Although it is very rare, this is not the first time turtles have been spotted hatching in France.

In the past 15 years, the RTMMF has noted two hatchings on the beaches of the Côte d’Azur, but out of these, only four babies survived.

Mr Sénégas, CESTMed director, said: “So you can imagine [the significance] of 63!”