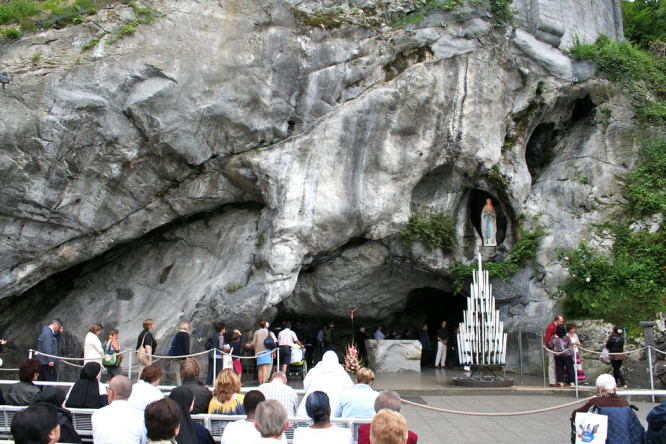 Security has been stepped up at Lourdes for the pilgrimage of worshippers to the Hautes-Pyrénées town for the Feast of the Assumption.

An additional 300 police officers and soldiers are on patrol at the site, including a team of 30 in the sanctuary itself. An aerial team will monitor the area from above, while worshippers can expect increased waiting times as they undergo bag searches and pass through traffic controls - while the route to the shrine has been pedestrianised.

Just three of the 12 entrances to the sanctuary will be open at any one time. Authorities have also banned processions between 12midnight and 6am.

Pilgrims started arriving over the weekend, flocking to the sanctuary in the foothills of the Pyrenees for a mass and procession to celebrate the important date in the Catholic calendar.

Authorities stressed there is no particular threat to the site or the festival, but Béatrice Lagarde, the prefect of the Hautes-Pyrénees département, told local media that 'there is no reason to downgrade the security system put in place last year', following the murder of a priest in his church in Normandy.

Lourdes is one of the world's most popular religious tourism venues, with the shrine marking the spot where the Virgin Mary is said to have appeared in a grotto to shepherd girl Bernadette Soubirous in 1858. Some 25,000 visitors are expected at the site on Tuesday, August 15 alone, the date of the celebration.

3 days ago
3
Brexit cards for Britons in France: Here is a first example