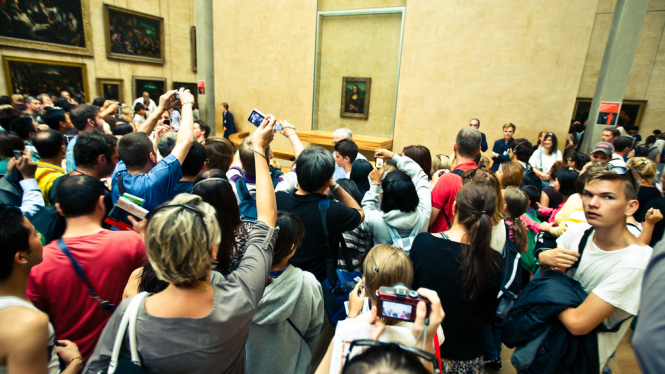 The Louvre has brought forward plans to introduce mandatory booking for visitors.

Pre-booking was intended to be introduced in 2020, but the sheer weight of visitor numbers this year has prompted museum authorities to introduce the measure from this autumn.

Officially, the idea is to better distribute the flow of visitors, 10.2million of whom flocked to the museum in 2018 - making it the most popular in the world.

The Louvre’s deputy managing director, Vincent Pomarède, told AFP said it was recommended that visitors pre-booked their visits already - before it becomes mandatory.

Numbers are expected to at least match last year's levels this year. In July, staff were forced to turn away visitors as the museum was considered full.

About 80% of visitors are believed to come just to see the Mona Lisa. Last month, officials had to restrict access for three days because of the chaos caused by the queues

But the painting has been moved from its usual gallery in the Salle des États, currently undergoing renovations, to the Galerie Médicis, lined with Rubens paintings.

To control the estimated 30,000 visitors a day who just want to see the masterpiece, the Louvre has already said that only pre-booked visitors will be guaranteed a glimpse, and even those are given as little as a minute to admire the artwork.

The Mona Lisa will be returned to her usual location for a major exhibition marking the 500th anniversary of Leonardo’s death, which opens in October.

Away from the more popular works, such as Mona Lisa, crowds are much thinner, but officials have said that the museum is so popular that introducing booking has become essential.