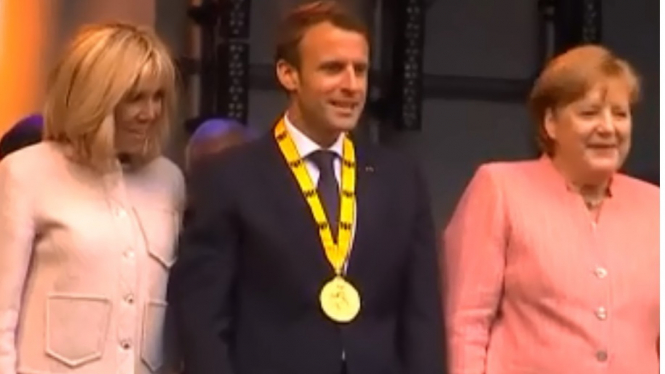 He also used the occasion to criticise Germany for economic policy choices which he said had harmed other states and to urge it to go further in supporting changes in the EU.

Mr Macron was in Aachen, Germany to receive his medal, which was given to him for “his vision for a new Europe and reform of the European project”, ”unrelenting determination and commitment” and “decisive struggle against every form of nationalism and isolationism”.

The prize is awarded by the city of Aachen, which was the medieval capital of the Carolingian empire, and it is named after the Frankish leader Charlemagne who led an empire which covered areas including modern France and Germany, Belgium, Austria, Switzerland and northern Italy.

Some commentators have expressed surprise that Mr Macron should be so honoured at this early stage, however Elysée sources told Le Point magazine it should be seen as “an encouragement”.

The last French president to receive the prize was François Mitterrand who received it jointly with then German chancellor Helmut Kohl in 1988. Mr Mitterrand used his speech to call for “a real money” for Europe and emphasised shared culture including his support for a Franco-German TV channel (which became Arte).

Mr Macron took the opportunity to press for faster changes in the EU, saying “let’s not wait, let’s act now”, that we should “take risks” and “not be afraid”, adding that Germany should stop "fetishising budget and trade surpluses, because they are achieved at the expense of certain others”.

He said he “believes in a much more ambitious European budget in which France will do its share, which will support economic, fiscal and social security convergence” and notably “a more integrated euro zone, with a budget of its own”.

As in his recent speech to MEPs, he also called for more tax on digital giants and spoke of the need to give better protection to common EU agricultural policy.

“Wake up! France has changed,” he said, adding that cutting public spending and making changes to the EU treaties were “no longer taboos”.

So far Germany has not supported some of Mr Macron’s key ideas, such as a Euro zone budget and parliament and its own finance minister.

Mr Macron said “some people in France” tell him Germany is “selfish, ageing, and doesn’t want to reform Europe”, “but I know it’s not true”.

Mrs Merkel admitted to “difficult discussions” between the countries “because our cultures are different” but said that “we will move forward on banking union, capital markets union and reinforce the Euro zone – make it more competitive and more able to face up to crises”.

The leaders also showed unity on further reform in defence and foreign policy.

“The days when we could simply count on the US to protect us are over… Europe must take responsibility for its own destiny,” Mrs Merkel said.

Alluding to America’s withdrawal from the Iran nuclear deal, Mr Macron said: “We have chosen to build peace in the near and middle East, other powers have chosen not to respect their word. Is that any reason for us to abandon our own choices?”

“I believe in a European sovereignty… which will make Europe a geopolitical, commercial, climate, economic, food and diplomatic power in our own right.”