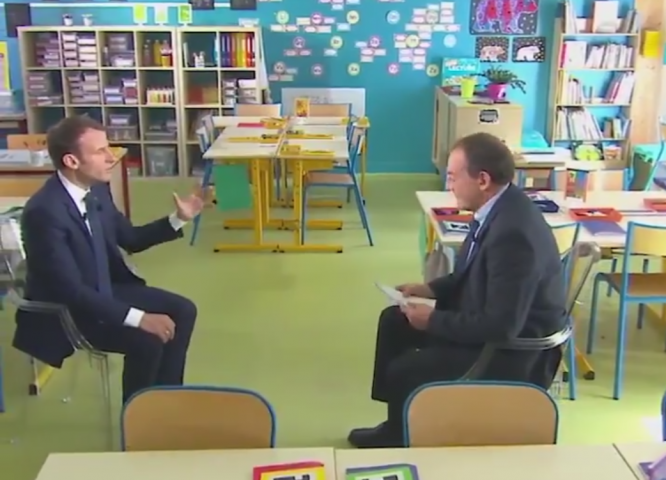 Against a background of protests on several fronts, President Macron took to TV today in a rare interview to explain government actions and win support for the promises that got him elected.

Speaking from a primary school classroom in Normandy on the one o’clock news on TF1, Mr Macron knew he was addressing viewers who were mainly retired, mainly rural – the ‘common people’ who likely did not vote for him.

Saying he had ‘proof that chemical weapons such as chlorine had been used in Syria by Bachar Al-Assad’s regime” he wanted Assad’s “means of using chemical weapons removed” and international law respected.

Today, President @EmmanuelMacron reiterated that the French Government has proof that chemical weapons were used by the regime of Bachar al-Assad. https://t.co/7sX4JscNxU

He wanted to guarantee humanitarian groups access and to get women and children out of the warzone.

But he added that “in no case will France allow tensions between Donald Trump and Vladimir Putin to escalate”.

Turning to the rail strikes where unions have not won public support, Mr Macron said that while understanding the problems for passengers and businesses, he was committed to the need for change and would not give in. (See the strike timetable here).

But he guaranteed that SNCF would remain a 100% public body “it will be written in the law” and called for ‘calm’ from unions who were worrying needlessly.

With his TV audience mainly retired and rural, he tackled two reforms that hit them directly – the rise in CSG social charge on their pensions and the 80kph speed limit.

And he answered directly: “I ask for an effort from the retired and I know it and I thank them. I do not see an open wallet when I see a retired person.

“Wait until November 1 and you will have a one-third reduction in taxe d’habitation. You will regain your buying power.”

On the speed limit, which rural dwellers feel will hit them hard, Mr Macron said it was a priority to cut road deaths. “With average rural journeys of just 40km a day it will only take two minutes more.”

But he added that speeding fines would be given to hospitals that treat road accident victims … and that if the speed reduction did not work “we will stop and give control back to departments”.

As the terror-hit supermarket in Trèbes opened again this morning for the first time since the attack that killed four, Mr Macron said mosques that preached sermons against the laws of the republic would be closed but he added that the problem was not with people who believed in Islam – “Islamism is not Islam”.

Although universities were relatively little affected by the lecturers’ protest, he called on students to take responsibility for their studies as there would be “no easy ‘chocolate’ exam this year”.

He added that the government would open 3,000 new school classes across France, including 1,000 in rural areas and bring down class sizes rather than closing classes because there were not enough pupils.

Government funding for communes will also, for the first time in eight years, not be reduced.