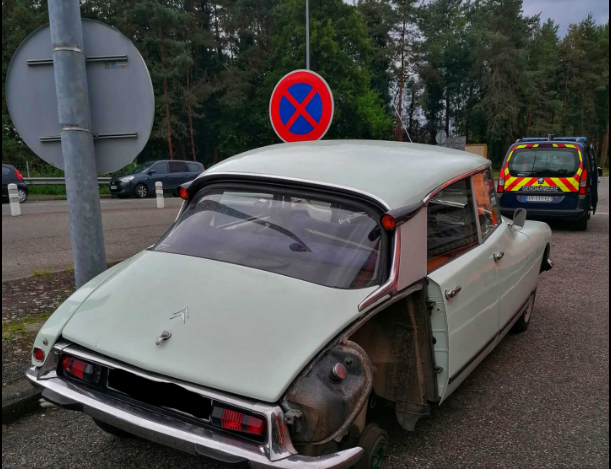 The Citroën that was stopped by police on the A64 Pic: Gendarmerie des Hautes-Pyrénées / Screenshot

The driver of an old Citroën DS was pulled over on his way home from Toulouse for driving with only three wheels.

It was the same type of car that saved former President De Gaulle from an assassination attempt on August 22, 1962, in spite of the hail of bullets from gunmen that burst two of its tyres.

The man pulled over in the Hautes-Pyrénées last week was heading towards Tarbes on the A64 and fined by police for driving without a wheel.

He insisted that he would have changed the back right-hand tyre had the spare been roadworthy.

The driver said he had discovered a couple of punctures while making his way home, but could not justify calling a tow truck just 10km from home in Tournay.

“Absolutely nothing forbids it. Ultimately, the fine is not properly justified”, he reportedly told La Dépêche.

The Citroën DS is famous for having saved the life of President Charles De Gaulle in 1962. While being driven from the Elysee Palace to the airport, the president and his wife came under attack from right-wing extremists opposed to Algerian independence.

The gunmen succeeded in puncturing the car’s tyres at the front as they fired more than 150 bullets into the car.

However, the car’s cutting-edge hydropneumatic suspension system enabled it to keep itself level and drive away - and the couple made it to their destination.

The assassination attempt was immortalised in Fred Zinnemann’s film The Day of the Jackal, based on Frederick Forsyth’s novel of the same name.

5 hours ago
5
Map: in which French departments are Covid cases rising?