Man to let himself die after Macron refuses medical aid 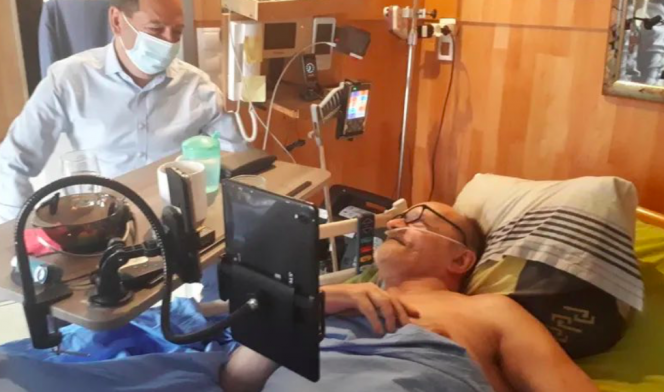 Alain Cocq suffers from a rare disease that has left him bed bound for the past two years.
By Joanna York

Euthanasia is not legal in France, but patients do have the legal right to refuse medical treatment and food under the Loi Leonetti. This is what Mr Cocq, 57, plans to do from this evening onwards.

He will share his experience via Facebook in order to illustrate “the forced agony of the Loi Leonetti”.

Appeal to the President for right to ‘go in peace’

Mr Cocq suffers from an extremely rare degenerative disease, meaning the walls of his arteries stick together, causing an insufficient amount of blood to circulate to the organs in his body. He has been confined to his bed for two years.

Increasingly weak, he had hoped to be allowed a medical prescription for a dose of barbiturates strong enough to end his life.

He sent a request for approval of this plan to President Macron, the only person Mr Cocq believes has the power to authorise his request.

Following his letter, Mr Cocq attended a telephone conference with a government official from the Élysée on August 25. During the call, Mr Cocq reiterated his request for Presidential approval, which would allow him to “go in peace”.

He believes that a medically assisted death would be “the ultimate act of care” that would shorten his “inhumane suffering”.

Mr Cocq had hoped his request would be approved, but it was refused.

He said: “I think that the Élysée, the legal experts, the constitutional experts, are trying to see how they can resolve the problem my dossier throws up, because they don’t want to be seen as inhumane.”

However, President Macron responded with a letter of refusal, which Mr Cocq shared in Facebook post today.