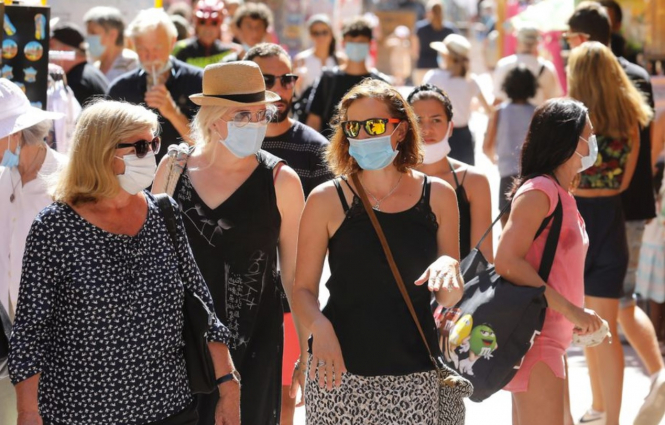 He gave a critical response when asked whether mask-wearing should be a personal choice for “those who feel like protecting themselves”.

He said: “This is something I have to stand up against: the idea that [wearing a mask] isn’t worth it.

“When masks are described as a restriction of freedom, for us the medical workers, and even more for those working in intensive care, there is something that’s not being heard.”

The doctor then compared the relative “restriction” of wearing a protective mask to the impact of contacting Covid-19.

Figures released by health body the Direction Générale de la Santé (DGS) yesterday evening (August 18) show that cases of coronavirus are still rising in France. In the 24 hours prior to the results being released, 2,238 new cases of Covid-19 were recorded. There are now nearly 400 active clusters in France.

In the past week, 16,129 tests were conducted, with the rate of tests now coming back positive at 3%.

Read more: Covid France: Why cases are up but hospitalisations stable

A 'culture of social distancing' needed

Many scientists and politicians have blamed the rise in Covid-19 cases in France on a lack of respect for social distancing measures.

During his interview, Mr Pialoux agreed that increased social distancing was necessary, but criticised the French government for allegedly confusing the issue by sending mixed messages about mask-wearing.

At the beginning of the Covid-19 crisis in France, official health recommendations did not include advice to wear a mask. Months later, masks have become a mandatory health measure in many public places.

“It was maddening,” Mr Pialoux said. “At first we didn’t need them, then it was announced that the President wouldn’t wear one even when he wore one the same evening in Mulhouse.”

The French town of Mulhouse (Grand Est) was one of the first areas in France to experience an outbreak of Covid-19 in early March this year.

According to the doctor, mixed messages from the government have resulted in “a lack of confidence” in official advice being given today.

The doctor suggests a straightforward solution: masks should be worn “everywhere” to simplify the message and help create a culture of social distancing.

He said: “Of course wearing a mask protects you, but above all, it protects other people. If you wear a mask and respect social distancing measures, you protect other people.”

Health concerns aside, some in France say they simply cannot comply with rules that make masks mandatory for financial reasons.

A father of five living in Montpellier (Occitanie) has recently decided to challenge an order by the local prefecture that makes wearing a mask obligatory in the historic centre of the city.

Marcel Miloudi told local news source France Bleu Hérault: “You need at least two masks per person, which means 14 masks every day we go into the city. It’s really difficult. We don’t have the means to buy [that many] masks.”

Legal proceedings against the prefecture were started by Mr Miloudi’s lawyer yesterday (August 18).

Masks at work mandatory in France from September