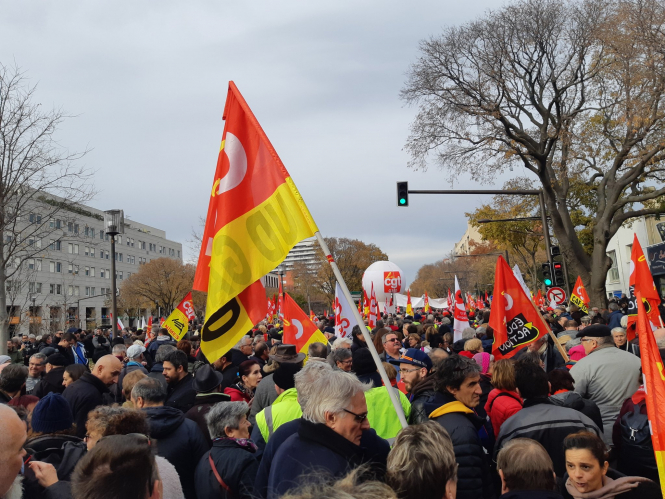 Disruption is continuing across France today as protesters continue to strike against pension reform (Photo: Nimes, December 5)
By Connexion journalist

Strike action is continuing across the country after between 800,000-1.5 million protesters were counted countrywide yesterday in the movement against pension reform.

Many workers say they are “ready to continue” action in the coming days, with the CGT union calling for a rapid response from the government.

So far, the government is expected to respond on Monday (December 9), with high commissioner in charge of the pension reform, Jean-Paul Delevoye, planning to hold “consultations at the beginning of the week”, and Prime Minister Edouard Philippe expected to speak on the issue “towards the middle of the week”.

Trains including TGV and Eurostar

Just one in ten high-speed TGV and Ouigo trains is running today, SNCF has confirmed, with 90% expected to be cancelled. There are also set to be cancellations and delays on the Eurostar, and just one in three Thalys international services.

Train passengers are advised to postpone their journeys if possible.

Around 15% of Transilien services will operate, although some lines (such as the K and R) will have no service at all. Around 30% of TER lines are operating, but largely though bus replacement services, and in some areas, such as Brittany, Centre-Val-de-Loire, and Hauts-de-France, up to 90% of TER services will be cancelled.

In Lyon, Twitter users were reporting that departure screens were showing so few trains today, that services for tomorrow morning had already started to show up on the boards.

Delays and disruption are also expected across the RATP metro and tram networks in Paris and Ile-de-France, as are RER services, with no lines to the Gare du Nord station.

Some trams will be operating, with passengers advised to check their specific routes before travelling.

Air France and other airlines

Air France has said that most of its long-haul flights are expected to operate today (Friday), along with 90% of mid-haul flights and 70% of domestic scheduled services.

EasyJet cancelled 210 flights yesterday, and said that “further delays are to be expected” today.

Ryanair said in a press release that it would be “forced to cancel a certain number of flights” due to the “national strike in France on Friday”, but did not specify the exact number.

Mid-haul, low cost airline Transavia France told the Agence France-Presse that it was operating “20% of scheduled flights” on Friday, equating to just 10 flights.

Passengers are advised to check in advance with their airline before attempting to travel.

The civil aviation authority (la Direction Générale de l’Aviation Civile, DGAC) asked all airlines to reduce their flight operations to France by 20% on Thursday and today.

This applies especially for the airports Paris-Charles de Gaulle, Paris-Orly, Beauvais, Lyon, Marseille, Toulouse and Bordeaux, to account for the two major workers’ unions that are taking part in the strike.

More than 350km of traffic jams were recorded in Ile-de-France before 8h this morning (compared to the usual figure of 200km), with more delays expected.

Yesterday, around 55% of staff in primary schools joined the strike, according to the minister for education. This rose to 78% in Paris, with no teachers showing up at half of the capital’s schools.

There were also significant school strikes in Rennes, Montpellier and Aix-Marseille.

Yet, education union SNES said that it expected at least 60% of teachers and educational staff to have returned to work today (Friday).

Some hospital workers were expected to continue to strike today, although there has not been consensus on the issue in the sector, with another separate day of strike planned for December 17.

It is not yet clear how long the strike will continue, but union bosses and protesters have said that they are ready to carry on until a satisfactory response is heard from the government.

Yves Veryrier, secretary general of union Force Ouvrière (FO), told news source France Inter: “It is important that we continue this movement, but not waiting until another day. Right now! We need as much public-private sector solidarity as possible, as we showed yesterday (December 5).”

He added: “May that be confirmed [and continue] today, tomorrow, Monday!”

Catherine Perret, CGT secretary, said today: “Workers showed that they were engaged yesterday. Very clearly, the ball is now in the court of [Prime Minister] Edouard Philippe and [President] Emmanuel Macron.” She added that the strike could continue “if there is no response”.

The last major strike against widespread pension reform in France took place in 1995 (although further movements also happened in 2003, 2007 and 2010). The 1995 strike lasted 23 days, brought the transport system to a halt, and led to the government backing down.