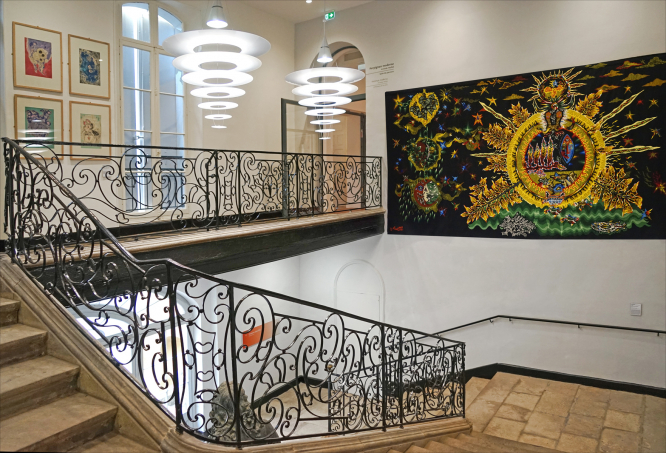 The mayor of Perpignan, in south-west France, has vowed to appeal a court's decision ordering him to close four museums that he had said could open last week.

Louis Aliot, who is also vice-president of the far-right Rassemblement national, opened the museums in Perpignan last week, arguing that limited numbers of visitors abiding by sanitary measures would be safe.

But a court in Montpellier ruled Mr Aliot had "disregarded the provisions" of article 45 of the decree of October 29, 2020 by authorising the opening of the museum of coins and medals Joseph Puig, the natural history museum, the Hyacinthe Rigaud museum and the Casa Pairal museum.

"The museums will close [again] tomorrow, I am appealing the decision, there is a legal problem," he told BFMTV, after judges agreed with government lawyers' argument that he could not override "on his own" a national decree.

But he went on: "I dare to hope that the Prime Minister and the President will now reassess the situation… because beyond the gravity of the pandemic which we have never discussed the basis, the fact remains that there is now a psychological phase … which we must take into account.

"And to open up the world of culture a little bit via the museums which are the easiest to do, it is an element, I think, which is likely to ... allow the public to glimpse a way out of the crisis."

Museums, theatres, cinemas and restaurants have been closed since last October, despite the easing of other national confinement rules. Mr Aliot had authorised the reopening of four of Perpignan's 15 or so museums in protest at the continued closures.

"We regret this decision, which will keep away our fellow citizens who are already suffering immensely during this health crisis," he tweeted in response to the court's decision. He told judges one of them, the Hyacinthe-Rigaud art museum, had received around 2,000 visitors since last Tuesday.

"Culture is a fundamental need that asks only to be expressed," he added.

Last week, Minister of Culture Roselyne Bachelot insisted France's museums would be the first to reopen. In a clear reference to Mr Aliot's decision, she condemned what she called "political initiatives (which) do not defend the cause of culture".

The Minister also announced on Monday, February 15, that ‘test concerts’ to study public venue Covid risk  would be held in Paris and Marseille in March and April - at the AccorHotels Arena and the Dôme in front of 5,000 and 1,000 spectators respectively.

"Subject to a health situation" and if the protocols are validated, two test concerts will take place "in the second half of March", with 1,000 people, in the Dôme in Marseille, "seated with the possibility of getting up, ” explained the minister. This experiment will be carried out with Inserm.

All people will be tested before the concert, but positive cases "will not be filtered out". Tests will also be carried out after the event, to see what happened in terms of contamination. Masks and hydroalcoholic gel will be distributed.

In Paris, 5,000 people will participate in an experiment to see what happens at a standing concert. This will be in the main hall of the AccorHotels Arena with the university hospital trust Assistance publique-Hôpitaux de Paris (AP-HP) carrying out the study.

Ms Bachelot also announced a European scientific conference, scheduled for Marseille on April 8, where the various experiments will be "compared" and studied "to build a resilient model" for the entertainment world.

She also reiterated her optimism for "seated festivals" in the summer.

Earlier this month, hundreds of artists, museum directors and others in the art community signed two petitions urging the government to allow museums to open again.