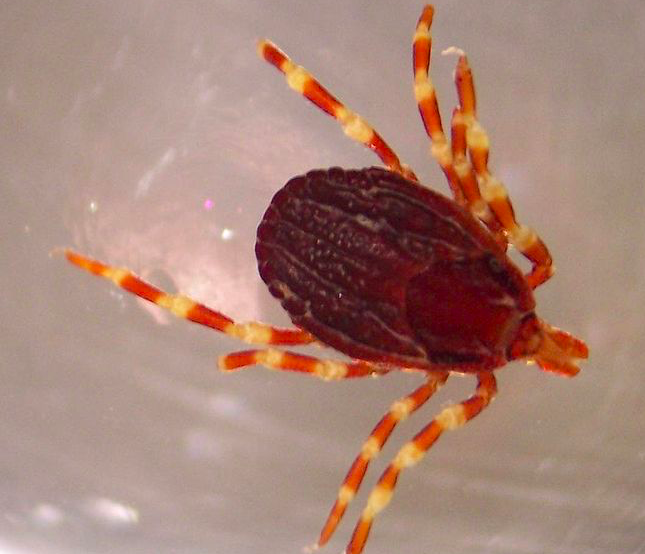 The tick hyalomma marginatum can be identified by its red and yellow striped legs.
By Joanna York

Currently the tick is present in departments along the south coast including the Pyrénées-Orientales, Aude, Hérault, Gard (Occitanie), Bouches-du-Rhône, and Var (Provence-Alpes-Côte d’Azur).

However, it has previously been found as far north as the department of Ardèche (Auvergne-Rhône-Alpes).

The tick has been tracked in the south of France since 2015, by a research team from agricultural research centre Cirad (Centre de Coopération Internationale en Recherche Agronomique pour le Développement).

Although it has expanded its territory in France since then, Frédéric Stachurski, tick specialist at Cirad, expects its progress will be limited by weather conditions.

He told newspaper Le Monde: “It’s an invasive tick as a result of climate change. But it’s dependent on the Mediterranean climate. We don’t think it would be able to settle in a climate that is more humid.”

The tick likes to live in scrubland and dry hills, which are common in the Mediterranean region.

As well as being found in France, it is common in Spain, Italy, Greece, Turkey, central Europe, and northwest Africa and can be identified by its eight red and yellow striped legs.

It is sometimes called the “tique géante (giant tick)” as it is twice the size of the most common tick in France, Ixodes Ricinus. Additionally, it increases in size as it consumes blood and can grow up to two centimetres large when fully fed.

Read more: Will France see an insect invasion this summer?

Low risk of virus from tick bites in France

Although the ticks can spread a virus that causes "Crimean-Congo" hemorrhagic fever, cases of this are rare in western Europe. No cases have been recorded in France and only four have been recorded in Spain since 2016, one of which resulted in death. The risk is slightly higher in countries in the lower Mediterranean such as Turkey, Greece and Bulgaria.

Bites are most likely to occur between March and July, when the ticks are active. They can sense prey by smell or by vibrations in the ground, and are able to jump up to five metres in order to attach to a host. However, while the ticks can bite humans, they prefer to feed on horses, livestock, wild boar and deer.

After feeding, the ticks drop to the ground, where they reproduce. Larvae from the ticks are most likely to attach to small mammals - such as rabbits - between July and September. As they grow, they feed off their host for up to three weeks before detaching from them.

Tick bites are painless, as the tick releases a combination of anti-inflammatories, pain killers, and anticoagulants when it attaches to a host.