Cookie Consent by FreePrivacyPolicy.com Memorial will be symbol of links between UK and France French News and Views in English | The Connexion
11 may 2021
Classifieds Currency exchange Newsletter
Login Register BASKET
Facebook Twitter

Memorial will be symbol of links between UK and France 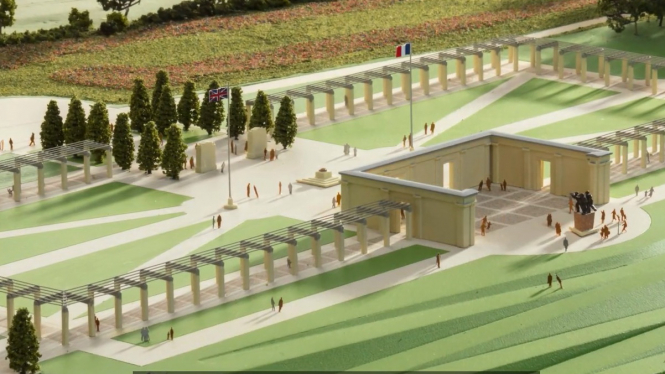 In a speech at Ver-sur-Mer, overlooking the landing area that was known as Gold Beach, President Macron said he and Mrs May had discussed the memorial at their first meeting in June 2017.

“We had to fix this anomaly; that no place pays homage to the British soliders,” he said.

“We owe our freedom to the veterans. This memorial is the symbol of the links between the United Kingdom and France, and nothing will ever erase them.”

Mrs May said: "Here in Normandy, the names of those British men and women who lost their lives will forever sit across the Channel from their homeland.

"We'll always remember their courage and conviction. And to the veterans that are here today – I want to say the only two words I can: Thank you."

Construction of the memorial, which recently finalised its planning permission stages after a public enquiry, is expected to start this month and take around a year to complete. Its centrepiece sculpture showing three soldiers, by British sculptor David Williams-Ellis, was unveiled today.

"Over a quarter million more supported operations from air and sea - while the French Resistance carried out extraordinary acts of bravery behind enemy lines."

The chairman of the Normandy Memorial Trust, Lord Ricketts, told Connexion: “There are wonderful cemeteries, but unlike Americans or Canadians who have national memorials with all the names of those who died, we’ve not had that.

"The veterans were keen to have a place where all their mates who died under British command are remembered together.”

The British Normandy Memorial will be funded by a government grant as well as donations (to donate visit normandymemorialtrust.org).

The names of the men and two women commemorated on it are mostly British soldiers, sailors, marines and airmen.

However people of some 30 nationalities in total are represented who were all fighting under British command, from Ireland and from European nations like France, the Netherlands and Poland that had been occupied by the Nazis, as well as those from further afield, enlisted in or attached to the British armed forces, from countries like Australia, New Zealand, South Africa and the USA.

Commemorations of the 75th anniversary of D-Day are continuing today in Normandy where Mrs May is now attending a service in Bayeux along with Prince Charles and Camilla Duchess of Cornwall and France’s Army Minister Florence Parly.

Mr Macron is attending a ceremony at the American Cemetery at Colleville-sur-Mer along with American President Donald Trump, who has just completed a state visit to the UK.

Mrs May’s visit to Normandy today will be her last official engagement before her resignation as leader of the Conservative Party tomorrow.