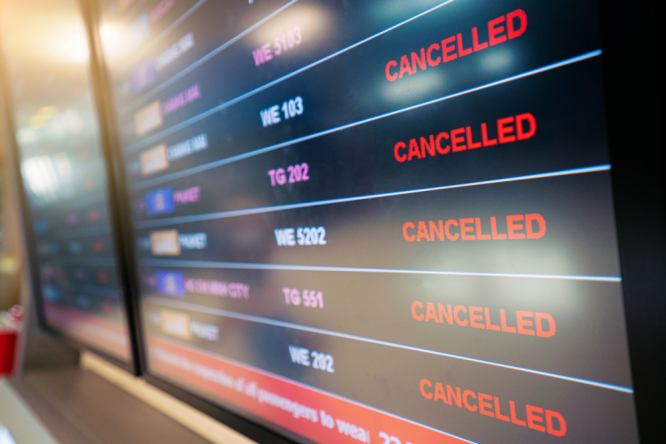 Complaints from travellers have ‘exploded’ due to lack of refunds for trips cancelled because of Covid, says the financial European Court, which has condemned governments and airlines for a lack of action.

Travellers’ right to a refund has been “widely scorned, not to say trampled” during the Covid-19 crisis, said the European Court of Auditors (ECA), the court that manages the EU’s finances.

Tens of millions of passengers were affected in 2020 when the Covid-19 pandemic grounded planes and cancelled holidays. EU law states that in case of cancellations, especially of flights, airlines are legally required to reimburse travellers, and not just offer them an exchange or voucher for a future trip.

But today (June 30), Annemie Turtelboom, member of the ECA, said that the number of complaints about non-refunds of flights had “literally exploded from March 2020, and [the issue] will have affected hundreds of millions, and doubtlessly several million across Europe”.

She explained that airlines had not communicated definite figures.

She told FranceInfo: “As strange as it seems, no-one in Europe, not the European Commission, nor the member states, know [how many are affected]. We have asked in vain; it’s radio silence.

“We haven’t obtained any figures; these are kept by airline companies, who consider these numbers to be very sensitive from a commercial and financial point of view.

“We find ourselves in a situation where everyone knows that there are victims, but no-one wants to know. In the ECA, we have meanwhile estimated that there were at least 50 million cancelled tickets, which the companies have not refunded.”

At the height of the pandemic cancellations, several companies were declining to offer refunds and instead asking passengers to accept exchange vouchers. Some even removed their refund website pages altogether.

This is despite it being “a requirement” that companies offer an “electronic form in the passenger’s language that allows automatic refunds if you provide a valid reason”, Ms Turtelboom said.

“But, too often, the client is caught in a game of ping-pong between the airline company and the travel agency, with each saying it’s the other’s responsibility.”

At the same time, airline companies requested - and were given - record government bailouts of almost €35 billion due to the Covid crisis.

Ms Turtelboom said: “Our governments could have or should have insisted that the granting of public aid be linked to the reimbursement of passengers. But no European Union country did that.

“In other words, we, as passengers, have become the bankers for airline companies in difficulty. What surprised us, is that governments accepted this situation.

“Worse, they gave it their blessing; this violation of European legislation. In France, a law voted through urgently allowed agencies to issue vouchers, without offering refunds.”

A total of 15 EU member states, including France, allowed airline companies to waive their obligation to offer refunds in the first months of the health crisis.

This measure ended on September 15, 2020, but many travellers have stated that they are yet to receive any refunds at all.

Late last year, leading French consumer association UFC-Que Choisir began to bring legal action against 20 airlines in the Tribunal de Grande Instance de Paris, after lawyers said that many airlines were only paying out refund requests if they had been legally forced to do so.

Even after Brexit, EU refund law continues to apply to all trips departing from the EU, including France; and to trips to an EU destination from the UK, if the transport company is registered in the EU.

Has Brexit changed UK-France ferry and air travel refund rights?
Missed a flight in France? A mediator can help you claim compensation
Airline passengers are still waiting for Covid-19 refunds