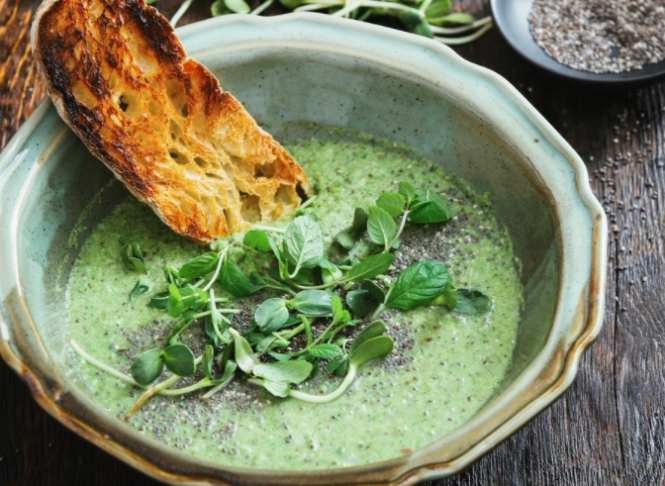 Elle France asked if "souping" was a new trend, but critics disagreed, and others queried the use of "ing" on French words
By Connexion journalist

Elle France - a well-known and established monthly women’s magazine - provoked mockery, jokes and bafflement online after it claimed that “souping” could be a new health trend, on a par with “juicing”.

Health-conscious foodies were advised to create a homemade blend of “detoxifying” vegetables, and eat it from a bowl, perhaps with a slice of toast on the side. "Could souping be the new juicing?”, the article asked.

And yet, to many, this seemed to be referring to a very normal, existing thing: eating vegetable soup.

As a result, the article has provoked much mockery online, with critics saying that “souping” is simply “eating soup”, and should not be seen as a “new trend”.

One Twitter user, @Tweega_, posted a photo of her soup, and sarcastically wrote: “When I think that this evening, I have done some ‘souping’ without knowing it! Thank you, Elle France and Elle A Table, for making my life make sense.”

And yet, commentators have also taken issue with the French language habit of putting “ing” as a suffix to existing words, often in a bid to make them sound more English, and, some say, more “on trend” as a result.

“Where does this irritating mania for adding ‘-ing’ everywhere come from? Must we really steal expressions from our Anglophone friends, even if it appears ridiculous?” asked news source 20 Minutes, commenting on the issue.

Another Twitter user, @Kmeru78, appeared to agree, posting a mundane photo of a Greek-style kebab, and sarcastically asking, in the style of a fashion magazine: “What if ‘grecquing’ was the new trend of the winter?”

And yet, the issue is not a new phenomenon, according to the linguist Alain Rey, quoted in 20 Minutes.

“This verbal form has become a noun in French,” he said. “It is an early example of the blending of these two languages, and appears to us [in French] as ‘more serious’ and ‘more modern’, even if it means sinking into a rather ‘grotesque’ style.”

He added: “If we add ‘-ing’ without warning, it ends up looking a bit like an advertising campaign. In this case, it appears a little ridiculous, because the word ‘soupe’ is already a very traditional, widely-used word in the French language.”

Ironically, of course, despite its anglicised sound, “souping” does not even exist in English.

Other similar French words created in this “grotesque” way (only some of which make sense in English) include le cocooning (not wanting to leave your cosy house or guest house); le contouring (a makeup style based on ‘contours’ on the face), and l’aquabiking (the sport of biking on water).

French also has a tendency to borrow English words for its own use, often to make the activity seem more “on trend” or modern, adding the article ‘le’ in front of them, such as le shopping, le jogging, and le camping.