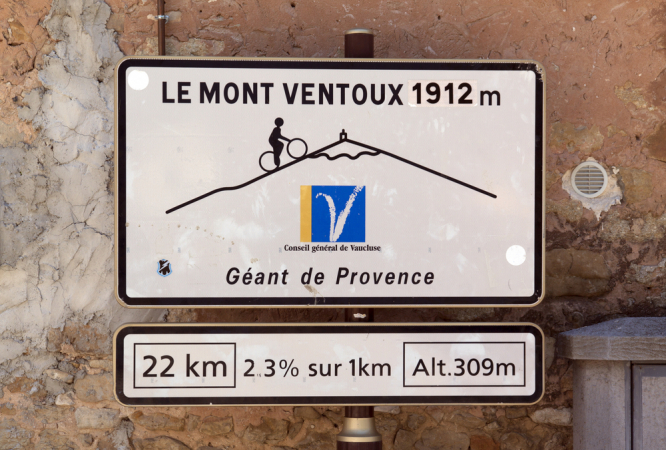 The infamous, ‘mythical’ Mont Ventoux stage of the Tour de France is taking place today (July 7). We explain – and explore ways to visit the picturesque peak even if you are not a world-class cyclist.

Mont Ventoux is a 1,910-metre peak in Vaucluse, Provence. It is a Unesco Biosphere Reserve, and is an official regional park.

Yet, it is perhaps best-known for being one of the most challenging summits in the Tour de France route, and has a number of forbidding nicknames, including ‘the Bald Giant’.

As the riders of this year’s Tour de France prepare to ride the summit today, the peak is closed to all other traffic, and amateur riders and watching members of the public have already gathered along the route.

This year, riders will climb the peak twice, for the first time in the history of the race.

Since 1951, the famous cycling race has included it 16 times. It has been the site of numerous triumphs and tragedies over the years, and has acquired a somewhat mythical quality.

In 1967, British rider Tom Simpson, collapsed and died while climbing the summit, which was later attributed to a mix of effects from heat, dehydration, and doping.

In 1970, champion Eddy Merckx collapsed and required oxygen after his victory on the peak.

Bernard Thévenet, the winner of the Mont Ventoux stage in 1972, has said: “We accept suffering on the Ventoux more than on any other summit.”

The route up to Mont Ventoux is infamous (Image: Daniel Dale / Shutterstock)

The peak is not only reserved for cyclists, however.

There are also food-gathering tours available, with locals guiding visitors on how to pick elderflowers to use in lemonade and tarts; or plantain leaves to make a mushroom pesto.

In Brantes, one tour from “les aventurières du goût” promises to show visitors “the knowledge of grandmothers about the herbs of Ventoux”, and the secrets of the plants that grow in the mountain’s foothills.

The tour includes a foraging outing, followed by a guided cooking session using the plants that you have picked.

Where there is food, there must be wine, and the prestigious Ventoux and surrounding Provence region includes many domaines that have visiting centres for wine tasting and vineyard tours – such as the château Pesquié in Mormoiron.

The nearest airport to the region is Marseille-Provence, and the nearest train station is Avignon-TGV. Temperatures are most mild in spring; the heather is most splendid in high summer, but temperatures can rise beyond comfortable levels later in the season.

Access to the local forest areas is restricted to help prevent forest fires. More information is available online at risque-prevention-incendie.fr/vaucluse/.

The countrywide and villages around Ventoux are picturesque (Image: Lubosalv Tiles / Shutterstock)

For those who want to cycle the peak, but would struggle to keep up with the Tour de France, there are also electric bike tours available to book.

People in good physical condition can start an electric bike ride from Bédoin, Malaucène or Sault. The Bédoin route is perhaps the most famous, at 21.8km, with 1,598 meters of climbing, and a slope of 10% on average.

Riders are advised to keep the same speed and pedalling rhythm while admiring the beautiful countryside. The peak can be reached in about two hours, depending on your speed.

Tours and bike hire are available in each town, including from Bédouin Location and Ventoux Bikes Trip.

Mont Ventoux is not accessible by road, due to inclement weather, from November to mid-April, from Bédoin, and closed until mid-May from Malaucène.