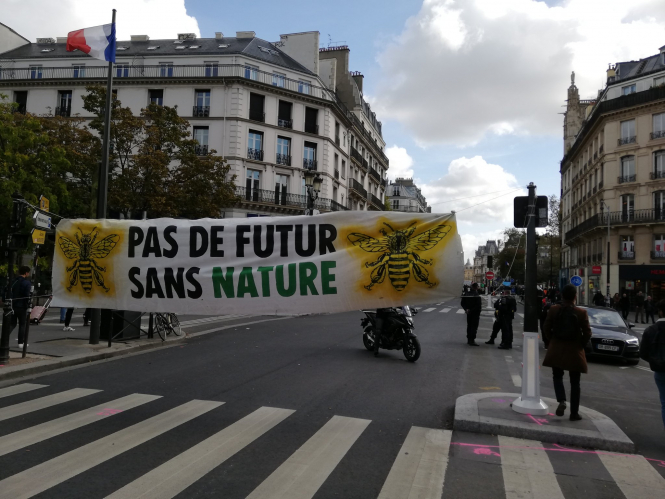 Climate change protesters hold up a banner in rue de Rivoli in Paris, which reads: "No future without nature"
By Connexion journalist

Protesters have been occupying streets and a bridge in central Paris since Monday (October 7), and began blocking parts of the major rue de Rivoli road yesterday (Thursday October 10).

They chanted slogans including “Pour la vie, on prend Rivoli (For life, we’re taking Rivoli)”, with banners reading: “Free the cyclists trapped in cars” and “We are the last defence for elephants”.

Plastic skeleton models were also draped over pedestrian lanes to symbolically “block” access to the street, which was left “car free” by early afternoon

Protesters and organisers then proceeded to hold “a conference” on the famous street, with several scientists and climate change figures addressing protesters with microphones - including Carola Rackete, the capital of the migrant rescue ship, Sea-Watch.

A climatologist specialising in Africa, Serge Janicot, also spoke. He said: “Thank you for being here. We have come out of our lab [to be here] and we are very happy. This is an emergency. We cannot negotiate with nature, or ask it to delay things by 10 years before we start doing anything.”

This week in Paris, protesters have already taken over Place du Châtelet and the Change bridge across the Seine River, and yesterday they also occupied a KFC-branded fast-food shop in the city centre.

Protests are continuing today (Friday October 11) and into the weekend, with organisers planning to coordinate “a huge and joyful wave of push bikes” in the centre of Paris, with a view to blocking cars as a “symbolic action to put the brakes on this road to [climate-damaging] growth”.

The Extinction Rebellion movement began in 2018 in the UK, and this week launched a fortnight of “civil disobedience” action across the world.

Related protests have also been taking place in cities including London, New York, and Berlin, and have reached countries as far as Australia and Canada.

More than 1,000 related arrests were reported in London yesterday.

At London City airport, protesters disrupted flights due to demonstrations, including one British Airways flight that was cancelled after one protester reportedly managed to climb on top of the aircraft.

Early reports said that this protester was former Irish Paralympian athlete James Brown, who is visually impaired, and who won a bronze at the Paralympic Games in London in 2012.

Paralympian James Brown is on top of a British Airways plane on the runway at City Airport as part of @ExtinctionR protests. pic.twitter.com/OysdT3wRKu

One flight was also delayed after one passenger began to make a speech about climate change as the plane prepared for take off. This was filmed and posted on social media. The passenger was “evacuated due to disruptive behaviour”, the airline - Aer Lingus - confirmed afterwards.

In Australia earlier today, the principle of "civil disobedience" - often described as non-violent protest that includes blocking streets - was represented by a mass "disco-bedience" dance.

In Paris, protesters this week took to mass singing while sitting on hay bales.