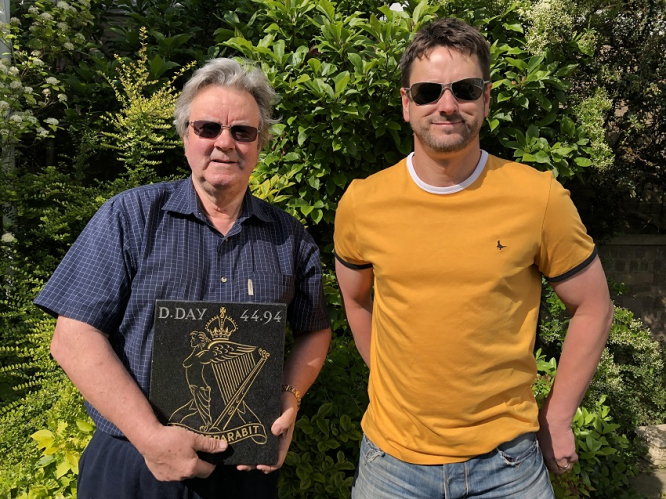 Tony Flitter and his son Nigel, with the stone
By Connexion journalist

Tony Flitter and son Nigel bought the crafted stone at a sale in Newark, Notts, and wanted to return it to its rightful place.

They contacted Connexion for help as the seller was French.

“It is a commissioned piece,” said Mr Flitter, from Lincoln. “It says ‘D-Day 1944-1994’ in gold relief with the insignia of the Royal Irish Rifles.”

Research online found a photograph of the stone at the war memorial in Longueval, Cal­vados, the first village to be liberated by the Rifles.

Mr Flitter said it was probably commissioned by a family member 25 years ago.

Letters to the mairie, museums and others got no response but Connexion contacted the Ministry of Defence press office for Northern Ireland and found it had most likely been beside the official memorial for the Royal Ulster Rifles, from which the Royal Irish Regiment was founded, at Longueval.

An official knew of the stone, which had been placed at the memorial, and it had been agreed to allow it to stay there as it was well produced.

He suggested offering the stone to the Royal Ulster Rifles Regimental Museum at Waring Street, Belfast.

He said: “Although all memorials in France are treated with reverence, it is inevitable that anything removable will eventually be picked up by some ‘magpie’.” Museum curator Colin Glass said: “The chairman and trustees of the Royal Ulster Rifles Museum are delighted to receive this item.

“We thank Mr Flitter for recognising the importance of a memorial stone and his outstanding research, tracing the regiment back to Northern Ireland.

“Although the stone is being returned to us, it will be in the museum on a temporary listing while we continue to search for its rightful owner.

“We are grateful to both Mr Flitter and Connexion for ensuring its safe return.”

Mr Flitter said: “I have returned other memorials in my 50-plus years of wartime interest. One of the best was a US army dog tag I found on the beach at Omaha.

“It was sent to the American War Graves Commission and they traced the descendants.

“It was on TV and they flew the soldier’s sister in for the presentation. The soldier was killed on Omaha beach. The lady has the dog tag on her wall.

“Thank you for your help. I am so pleased we saved it.”