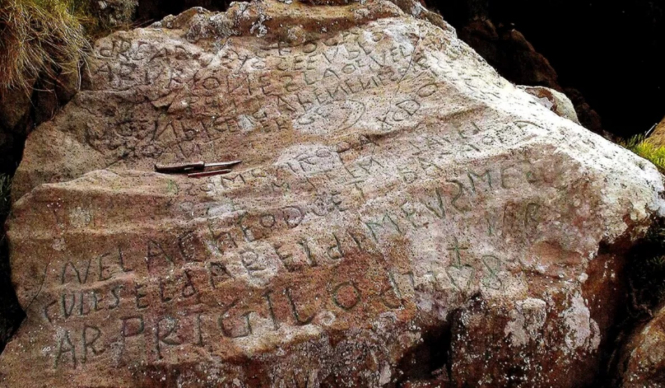 The rock is covered in writing and drawings on one side, but these have been a mystery up until now
By Connexion journalist

The rock is in the small commune of Plougastel-Daoulas, in Finistère. It has a 250-year-old, mysterious inscription engraved into it, with experts thus far having had no real idea of the writing’s meaning. It is thought to be in a sort of Breton dialect.

The commune has now named two winners - and two possible solutions for the mystery - after it launched an international competition to ask for ideas. As well as kudos for helping to solve the puzzle, the prize for the winning suggestion was €2,000.

There were 61 entries to the competition. Most came from France, but there were also suggestions from Brazil, the US, Thailand, Russia, Spain, Italy, and the UAE.

The jury was made up primarily of historians, who selected two eventual winners from the group, and recognised the entrants for their similarities.

The first hypothesis came from Noël René Toudic, professor of English, who has a degree in Celtic Studies. He said that the inscription was likely about a soldier, Serge Le Bris, who may have died at sea during a storm. Another soldier, Grégoire Haloteau, was then asked to engrave the rock in memory of the dead man.

The second hypothesis came from reporter and writer Roger Faligot, and comic book author and illustrator Alain Robert. They suggested that the inscription was by someone expressing their anger against those who caused the death of a friend.

Dominique Cap, mayor of Plougastel-Daoulas, told the Agence France-Presse: “We tried to find out what it said; what the history of this rock was - these 20 lines engraved into the stone. We asked historians, regional archaeologists, but we didn’t find anything. So we said, rather than continue in ignorance, why not make it a competition?”

He said: “We [now] have two totally different paths but have arrived at a similar historical background [with both hypotheses]: that of a sailor who died at sea, and a friend who engraved this stone in homage to him.”

He added: “There is still a way to go to solve the mystery completely”, but reminded people that up until now, the writing had been “totally mysterious”.

Some parts of the text remain unreadable, and the soldiers named by Mr Toudic were yet to be identified, he said.

The situation was dubbed “The Champollion Mystery”, after Frenchman Jean-François Champollion, who is known primarily as the decipherer of Egyptian hieroglyphs and regarded as one of the fathers of Egyptology.

The commune is now looking to make the rock more accessible to visitors who may be interested in its story. It is currently positioned at the base of a cliff.

It has engravings covering up almost one entire side, as well as drawings, including one of a sailboat with a mast and rudder. Two dates can also be seen: 1786 and 1787, which appear to correspond to the years of construction of different forces that once protected the Brest coast.

2 hours ago
3
Will Britons need a health pass to visit France from June 9?