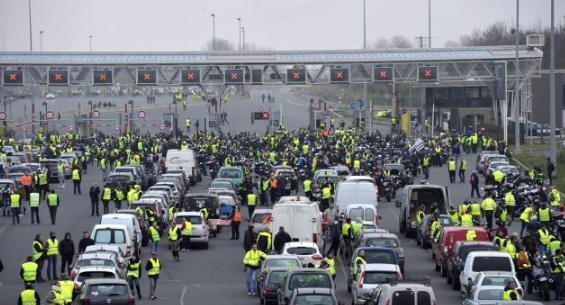 A 'gilets jaunes' protest over the weekend
By Connexion journalist

The Gilets Jaunes' protests are continuing into a third day, with demonstrators blocking roads, fuel depots and strategic roundabouts in an ongoing dispute over rising fuel prices in France - with nurses set to join the protest on Tuesday.

Oil facilities in Vern-sur-Seiche, near Rennes, La Pallice, in La Rochelle, and Fos-sur-Mer, in the Bouches-du-Rhône are currently blockaded; the A16 between Calais and Belgium has effectively been closed since 5am by protesters; while toll points on the A36, near Larivière, Belfort, and Limas, on the A6 Villefranche-sur-Saône, have been blocked since before dawn.

On Tuesday, 30 years after the strikes of 1988, some of France's 660,000 nurses will be back on the streets on Tuesday, in support of the protests. Some had joined in the weekend's blockades and demonstrations.

Members of the profession, notably independent professionals who care for patients in their homes, are having to absorb the added costs as they do not receive fuel allowances.

In a statement, the Convergence Infirmière union, said: "Fuel prices are constantly rising, for all French citizens, at a delirious rate, which is driving the inflation curve upwards. Independent nurses are all the more concerned because these incessant increases penalise them not to get to work... but to do their job!

"Fuel is one of the components of their profession since, let us not forget, liberal nurses travel to their patients' homes, 7 days a week, 24 hours a day... 365 days a year."

They point out that hospitals would struggle to cope with the number of patients if independent professionals did not keep beds clear by allowing patients to be treated at home.

Despite the pressure, Prime Minister Edouard Philippe vowed on Sunday evening that the government would stick to the plan to raise fuel taxes further in January.

His comments came after several ministers had earlier declared that there would be no change in the government's line. "So far as ecological taxation is concerned, we'll carry on as planned," Environment Minister François de Rugy said. "Not to do so would be irresponsible."

One person died and 409 were injured during Saturday's nationwide protests, in which 287,710 people took part in 2,304 roadblocks according to government figures. The number of demonstrations rose overnight and into Sunday, as about 3,500 continued to demonstrate at 87 sites. A total of 282 people were arrested on Saturday.

"There were attacks, fights, stabbings," Interior Minister Christophe Castaner told RTL radio. "There was a great deal of alcohol in some places and that lead to idiotic behaviour that can lead to violence and that becomes unacceptable."