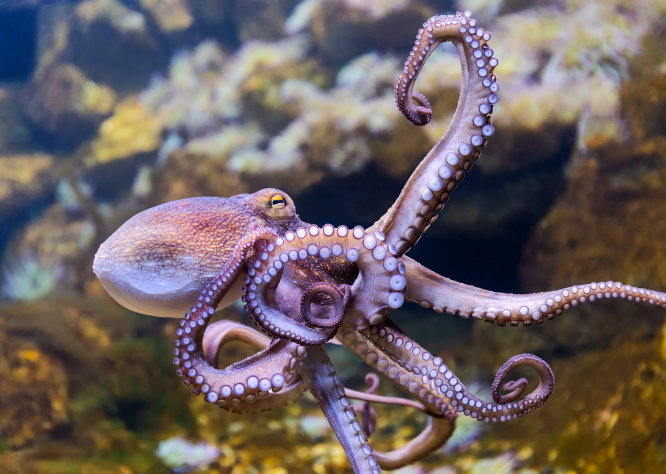 Climate change is thought to be behind the rise, with milder temperatures in winter causing an unprecedented increase in octopus numbers in Brittany this year Pic: Henner Damke / Shutterstock

Lobsters and scallops are among the sea life threatened by an increase in octopus numbers in Morbihan, Brittany, prompting fishermen to worry about the effect the predator could have on revenue.

There have never been so many octopuses in these waters, local fishermen have said.

Simon Le Gurun, a fisherman in Quiberon, told LCI: “This year, for shellfish, it’s screwed, especially for crabs. Octopuses eat lobsters and crawfish right out of the traps.”

Another fisherman, Patrice Douaré, told TF1: “The octopus got into our trap, and ate the whole catch.”

He said: “So far, half of my lobsters have been eaten, so of course, at this time of year when the price is rather high due to tourism, it obviously represents a loss of earnings.”

The price of lobster varies from around €30-€35 per kilo.

Meanwhile, despite the lack of shellfish, the number of octopuses being ‘fished’ has exploded to 17 tonnes this year, up from just one tonne last year.

Octopus sells at around €5 per kilo and is mostly in demand outside of France.

David Hybois, operations manager at Quiberon fish market, said: “This is a product that is exported mainly to Italy, Spain, and Portugal.”

Demand for octopus in Brittany is relatively low, but one local fishmonger, Stéphane Le Nain, said that he was offering it to his customers and restaurant owners regularly, in a bid to increase demand.

He said: “It can be cooked in ‘Amoricaine’ style, the same was with normal fish or calamari. This product can have real value.”

Climate change the cause

Local sealife experts have said that climate change is behind the rising octopus numbers.

Dominique Barthélémy, sealife conservationist at the Océanopolis in Brest, said: “If we have mild winters, then the water temperature will favour the development of younger [octopuses] and births in the year, and then, in that case, populations can rise very quickly.”