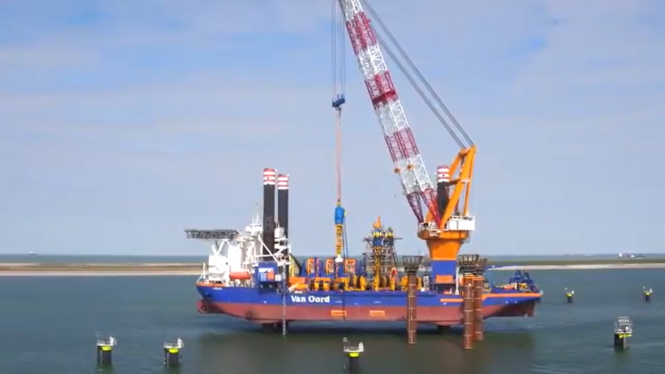 The 138-metre-long drill ship Aeolus was working in the bay of Saint-Brieuc, near the site of a future wind farm Pic: Ailes Marines / @AilesMarines / Twitter

A 16km-long oil slick has been reported off the Brittany coast, after a drilling ship helping to build a new wind farm accidentally dumped oil into the sea.

The 138-metre-long drill ship Aeolus was working in the bay of Saint-Brieuc, near the site of a future wind farm run by Breton wind farm company Ailes Marines, when the accident happened yesterday, at around 06:30 on June 14.

The commander of the ship raised the alert.

The Brest maritime authority took charge of the report, and said: “The pollution, first observed by the Cleanseanet satellite, then confirmed by a customs plane at 14:20, caused a slick 16 kilometres long and 2.7 kilometres wide.”

An anti-pollution ship, Le Sapeur, has arrived on-site today (June 15). It will work to ensure the slick does not wash up on the Breton coast.

Le Sapeur is owned by la Marine nationale in Brest, specialists in dealing with sea pollution. It is accompanied by a 300-metre-long barge, which has absorbent pads designed to soak up the oil.

Plane and satellite observation of the slick will also continue today.

The Aeolus is owned by Dutch shipping company Van Oord, which has been served notice that it must work to stop causing danger by pollution.

Ailes Marines, the Breton company in charge of developing, constructing, and running the planned offshore wind farm, has told the maritime authorities in Brest that the Aeolus has been ordered to leave the bay of Saint-Brieuc this morning, and return to a Dutch port to have its drilling components checked.

Maritime authorities have not yet confirmed the scale of risk that the pollution may cause to the Breton coast. A plane is set to fly over the area this morning to give more precise information.

However, authorities have confirmed that the dumped oil is less viscous and less difficult to clean up than heavy fuel oil, and may evaporate and dissolve into the seawater.

It comes as Corsica is still dealing with the after-effects of a 35km-long oil spill off its coast four days ago.

Yesterday it was confirmed that another beach – Targo, in Conca – had been evacuated and closed due to the spill, with black lumps reported on the sand.

It is the third beach to have been closed as a result of the slick; Favone beach in Corse-du-Sud closed first, followed by Solaro beach, near Solenzara.

Several tonnes of oil were already cleaned up over the weekend.

François Chazot, prefect director in Corse-du-Sud, said: "Mayors have issued orders to close beaches [polluted by oil]. A range of methods are being used to fight against this oil patch.

“We have had some sporadic arrivals [of oil] on the beaches, and are dealing with them on a case-by-case basis. The mayor has organised clean-up operations with the resources of the local council, the fire brigade and the civil security service, to enable the beaches to be reopened.”

The spill was discovered on Friday June 11 during a military exercise. Maritime and air authorities are now observing the area to ascertain the extent of the damage. Investigators are still searching for the ship suspected of dumping the oil.

Christine Ribbe, spokeswoman for the Mediterranean maritime prefecture, told the AFP on Monday 14: “Very scattered and very fine micro pellets [of oil] were observed by [our] planes.”

The Marseille prosecutor has opened an investigation into the spill, and said in a press release yesterday that “everything is being done to identify the captain and the company responsible for this pollution”.

Analysis on the weather, sea currents, wind and the state of the sea will be used in an effort to determine where the oil may have been dumped, and by what ship. The condition of the slick suggests that the oil was dumped recently, authorities said.

Three ships have been identified as possible perpetrators so far, but other ships may be contacted for information. If the spill is found to be illegal, and the perpetrators found guilty, the captain and shipping company responsible could face fines running to many millions of euros.