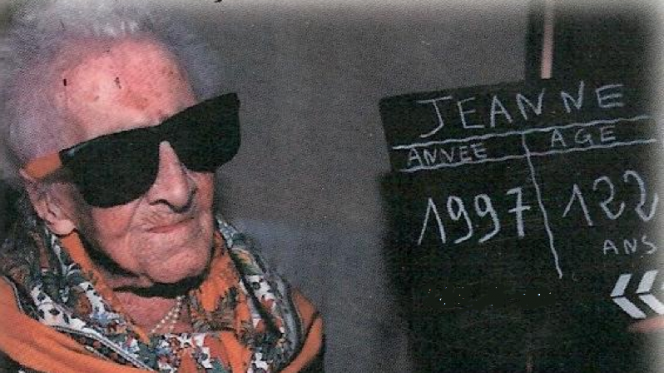 Jeanne Calment officially lived until the age of 122 years, five months and 11 days
By Oliver Rowland

According to accepted history, Jeanne Calment died in Arles in 1997 aged 122; three years older than the next-oldest person on record, an American. Her longevity famously meant that a local notaire ended up paying twice the value of her home after he bought it en viager when she was 90 (he died two years before her after paying her rent for 30 years and his widow continued to pay).

Now however new Russian research claims to provide evidence that the woman who died in 1997 was not Jeanne Calment but rather her daughter Yvonne, who was supposed to have died of pneumonia aged 36 in 1934. It is suggested that it was really Jeanne who died in that year, aged just 59, while Yvonne pretended to be her own mother and then lived on to an actual age of 99.

It is said that the motive for the switch would initially have been for the daugher to avoid paying inheritance tax, as Jeanne Calment was well-off.

Two researchers, aging expert Valery Novoselov and mathematician Nikolay Zak, have researched this switch theory, which was also alluded to in a book about insurance published in 1997.

Among other factors they studied old photographs of the two women and they claim that key aspects like eye colour and chin-shape are different between the young and old ‘Jeanne Calment’. They add that Jeanne’s extraordinary health also raises doubts about her claimed great age; for example she had good muscle tone and could sit up without support and suffered no dementia.

The claim of a switch has been called “completely impossible and unrealistic” by the former mayor of Arles at the time of Jeanne’s death who said she was under supervision by numerous doctors who would have noticed if something was amiss. It was never noticed by locals in the town of Arles or discovered by the notaire who took out the viager.

What is more if the claim is true it then it would also suggest involvement by others in the cover-up, notably Jeanne’s husband who she married in 1896 and who died in 1942. The research director at French national health and scientific research body Inserm, who helped validate Jeanne's age for the Guiness Book of Records, has stated he has no doubts about it and the new research is defamatory towards the family and ignores the evidence in favour of Jeanne's record age.

However research director at French national demographics body Ined Nicolas Brouard states he has had some similar doubts before and the Russian research is "good work" and a good argument for exhuming the bodies of the two women so as to find out once and for all.