Our experience flying Nice to Edinburgh with Covid and Brexit rules 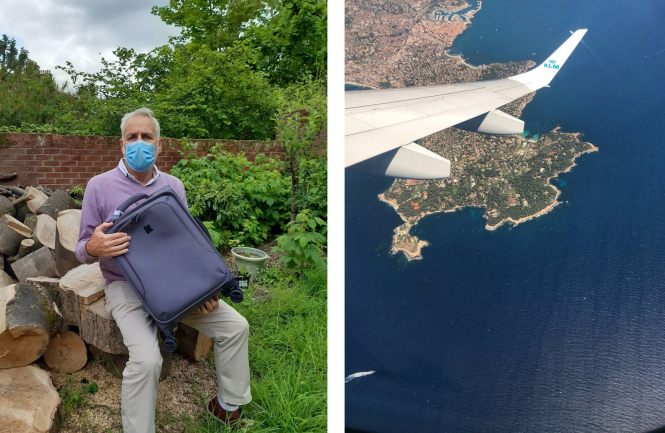 Writer Ken Seaton in the garden of the Glasgow place in which he is self-isolating – and the view from his KLM flight after take off from Nice as it flies over Cap d’Antibes Pic: Ken Seaton

After months of trying to get back to Scotland from Nice to see our family, we have finally done it. So, what was it like travelling this week with full Covid restrictions and full Brexit imposed?

We were on tenterhooks most of the way.

It was long and tiring with lots of queues and, unusually, the flights were the restful part.

My wife, Maggie, and I have not seen our children and grandchildren for a year and each time we booked to go home our flights were cancelled as travel restrictions tightened.

But as we are now both double-vaccinated, we wanted to get moving.

When the UK government kept France on its amber list and easyJet cancelled our June 30 flight, we decided to travel earlier, do the required 10 days of self-isolation, and pay £170 each for two- and eight-day tests.

That meant KLM flights via Amsterdam, and we sent our large case by courier (€43.59 door to door).

Unlike pre-Brexit, contents had to be itemised, with restrictions on cheese, liquids, meats and valuables.

For ourselves, we booked free PCR tests two days before the flight and then, on June 24, we headed to Nice Airport.

There was a queue for boarding cards at the KLM desk as we had connecting flights to Edinburgh, but after our vaccination and PCR certificates were checked, we were on our way.

The flight was full but, with only two seats occupied on each side of the aisle, it was not unpleasant.

KLM had texted warning of new procedures at Schiphol for UK flights, and so we had to go to a gate (D08) for extra Covid checks.

There were two queues. Airport staff directed passengers either to the long queue or, for passengers on a fast turnaround for Heathrow, the shorter one.

Unfortunately, that was the last time the staff remembered others had flight times approaching.

Sadly, the Schiphol system was a shambles. There had been too little thought applied to the process, there were too few staff, and too little awareness of departure times.

Shuffling forwards, we got chatting to an Aberdeen oil worker who was heading home from Kazakhstan on a flight just before ours. He had had the Sputnik vaccine but also Covid, where quarantine meant a tiny room and not being allowed out.

Nerves jangled as more people joined the ‘Heathrow’ short queue, and our long queue stalled. Mrs Seaton made a decisive move to ask what was going on. Seconds later she was urgently signalling me forward.

An official pointed us to the next empty booths and, health documents scanned, we were scurrying to the bus for the plane…but both were virtually empty.

The other passengers were still in the queue. No official had noticed that time was ticking on.

The plane was held until all the other passengers arrived, and it went from empty to full. Panic over and we were off.

Despite some delay as a couple of Dutch women were held for further checks, we were through – to a long hunt (in the rain) for our bus to Glasgow.

Our Covid tests had arrived at our self-isolation destination earlier the same day, so we only have to suffer a bit more discomfort, and then we can enjoy our holiday.

European health travel pass: How to download and use it
Covid-19: Rules for travel to and from France