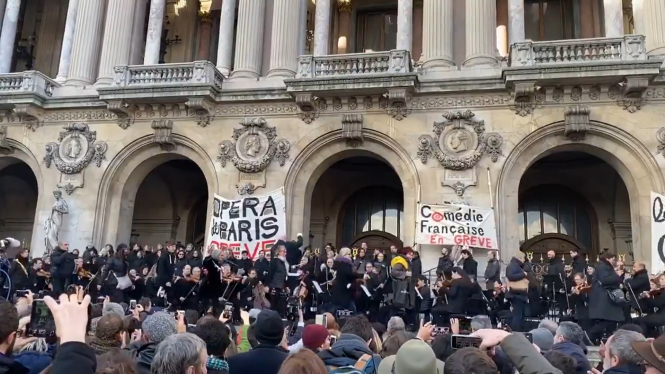 Orchestra members currently benefit from a special retirement system, which would likely disappear under the government’s proposed universal system rules.

Staff gathered in front of the Opéra Garnier in the capital city yesterday (Saturday January 18) to mark their opposition to the plans. As part of their movement, they performed an informal, outdoor concert to watching journalists and members of the public.

The strike included 200 musicians, as well as other key performers and staff members, including ballet dancers, choir singers, and behind-the-scenes stagehands. Also present were some members of prestigious, state theatre company la Comédie-Française, which also has its own “special pension system” that would be at risk under the proposed new regime.

Opera orchestra members have been on strike against the pension reform since the beginning of December 2019.

They gave a similar concert in the same place on December 24. That concert also included dancers, who were not there this time. The orchestra also performed a “strike show” on December 31, this time in front of the Opéra Bastille.

Opponents to the pension reform say that the Paris Opera depends on its current pension system. Since the beginning of their strike, 67 Paris opera performances have been cancelled.