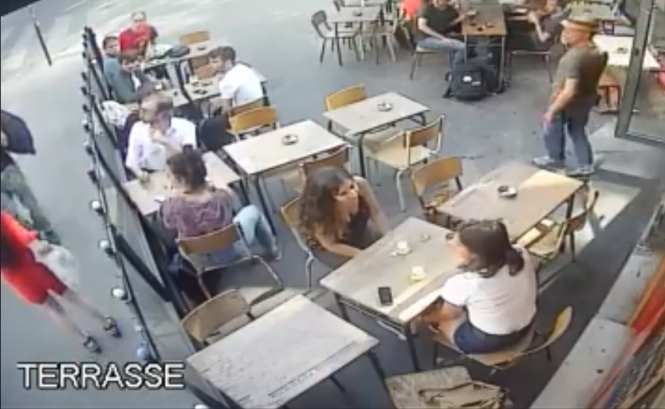 The trial of a man accused of a now-notorious street attack on a woman in Paris has been postponed pending a psychiatric evaluation of the accused.

The 25 year-old suspected of attacking 22 year-old engineer Marie Laguerre has been held in the psychiatry ward of the hospital Bichat since the beginning of August. Ms Laguerre visited the police station in Paris’s 19th arrondissement to identify her attacker.

The incident, which took place in the Boulevard de la Villette in the 19th, was captured on CCTV by a nearby café and published on Ms Laguerre’s social media pages, sparking outrage in France and across the world.

Writing on her facebook page, Ms Laguerre explained her aggressor had addressed her rudely, making lewd sexual remarks and whistling. Fed up of experiencing such sexist behaviour, she had retorted with ‘ta gueule.’ (shut up)

He then threw an ashtray at her and hit her in the face, in front of witnesses.

Speaking to FranceInfo, Ms Laguerre has said that, by reporting the attack, she hoped that violence towards women will no longer be tolerated.

“I do not tolerate this type of behaviour. I can not be silenced and we should no longer be silenced.”

At the trial, Laguerre emphasised that, “hatred is never the response. We must let justice take its course.”

Ms Laguerre’s posts have attracted thousands of likes and comments from supporters calling for an end to sexual harassment in the streets. A self-declared feminist, she has since turned to activism, setting up a website called Nous Toutes Harcelement (we are all harassed) to collect similar stories experienced by other women around the world, using the hashtag #NousToutes.

Paris’ prosecution department launched an enquiry into ‘armed violence with intent and sexual harassment’ on July 30.

Earlier this month, a law targeting sexual harassment, aggressive behaviour and catcalling in the street was passed. Those making lewd comments on someone’s appearance or clothing will be instantly fined between 90 - 750 euros, stretching up to €3,000 in some circumstances. Continuing to take a firm stance against sexual harassment, the French government have also made upskirting a crime, with those guilty receiving a one-year prison sentence and fined €15,000.

The trial will resume on October 4.