Planet Mars probe tech to be piloted from Toulouse 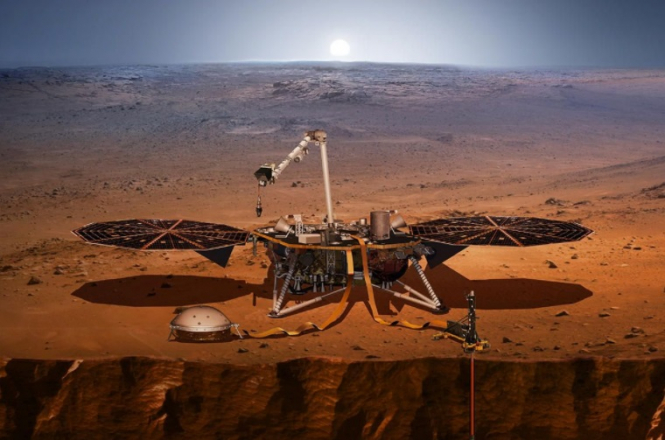 An impression of what the probe will look like as it explores the Red Planet, piloted by engineers in the Pink City
By Connexion journalist

The InSight Martian probe will launch from California this weekend, but its main piece of tech is a “seismometer” named SEIS (Seismic Experiment for Interior Structure).

This will be programmed and piloted by engineers at research centre Le Site du Centre National d'Études Spatiales (Cnes) in Toulouse (Haute-Garonne, Occitanie), for the entirety of the Mars mission.

According to Cnes, SEIS will touch down on Mars in November this year, and will enable engineers to “listen to the planet’s beating heart” - that is, take seismological readings of interest.

These are expected to offer further insight into Mars to the scientific community.

The launch flight is to be screened live at the Cité de l’Espace space centre in Toulouse tomorrow, in the presence of the mission’s head, Philippe Laudet, and other specialists.

Commenting on the mission, Mr Laudet said: “We are beginning to know the surface of this planet, but we do not know the thickness of its surface crust, or if it has a solid or liquid core. SEIS will allow us to look at the inside of Mars."

He added: “By doing geological comparisons, we want to shed light on this big mystery: why this planet [Mars], which at one point appears to have been so similar to Earth, suddenly froze and turned into an icy desert.”

Toulouse has a long history of space engineering and travel, and has most recently focused on Mars.

The ChemCam, a laser “eye” that is currently analysing Martian soil, and the forthcoming SuperCam, were both in part designed and engineered at the research centre l’Institut de Recherche en Astrophysique Planétologie (IRAP) in La Ville Rose (Toulouse is often nicknamed the Pink City due to the rosy colour of its buildings).

The SuperCam is set to be installed on a rover that is scheduled to launch in 2020. Among its many tasks, it will look for organic particles on the planet - signs of life - and will be equipped with a microphone, to capture “the sound of Mars” for the first time.