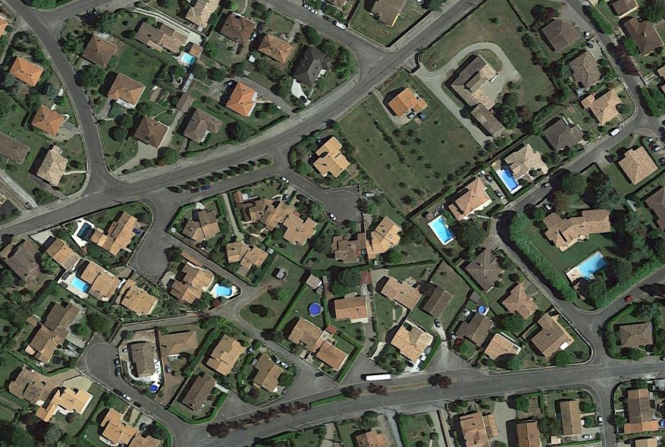 Aerial view of some swimming pools in Marmande, from Google maps
By Justin Postlethwaite

If you have built a swimming pool on your property and not declared it to local tax services, avoid being too relaxed beside it this summer… you might still be facing a bigger tax bill.

Authorities in Marmande, Lot-et-Garonne have used aerial images from Google maps to find undeclared swimming pools – and are filling town coffers with the resulting property taxes.

Tax officials in the town, which has 18,000 inhabitants and 500 declared pools, tracked down the 300 residents who built a swimming pool without authorisation. Following their discovery of the prohibited piscines in 2015, they now have recouped €100,000.

Speaking after the latest council meeting, in which the findings were reported, finance assistant Josette Jacquet said: "It's huge, we did not expect such a shortfall. It is not fair that some pay, and others do not."

One piece of good news for pool owners, at least in Marmande: no retroactive taxes will be pursued by the council. However, they do hope that the operation will compel residents to keep their taxes in good order.

Not all owners of undeclared pools are so ‘lucky’, however, as tax offices are entitled to levy steep fines for not following the rules.

For many who move to France, having a swimming pool at their property is an important part of the dream, especially in southern areas that get very hot in summer.

It is important to note, however, that as well as the cost of the pool, accessories and electricity, having a pool on your property can increase your taxe foncière and taxe d’habitation bills substantially.

An above-ground pool – which involves far fewer administrative and security regulations ­ – does not need planning consent unless greater than 10m² or higher than 1.80m.

An in-ground pool over 10m² and under 100m² requires a works declaration (déclaration préalable) while a pool measuring over 100m² or has a cover above ground that exceeds 1.80m in height, requires planning permission.

The tax declaration requirement is to send in to the tax office form 6704 IL (which can be found at impots.gouv.fr) within 90 days, if you have built either an in-ground pool or a rigid, above-ground one.

Since it increases the value of your home, having a pool means an increase in the annual taxe foncière payable, though there is a two-year exoneration after the declaration.

Taxe foncière generally does not apply to pools that can be dismantled and are not permanently fixed to the ground with some form of masonry, though taxe d’habitation may apply depending on how permanent the construction is (not, however, to such obviously temporary installations as inflatable pools).

These are good times for the swimming pool industry in France. Figures from the Fédération des Professionnels de la Piscine (Federation of swimming pool professionals) which has over 1,000 members, show that in the year to September 2016, there was a year-on-year hike of 20.5% in the number of private pools built in France – and all of them are visible on Google Maps!