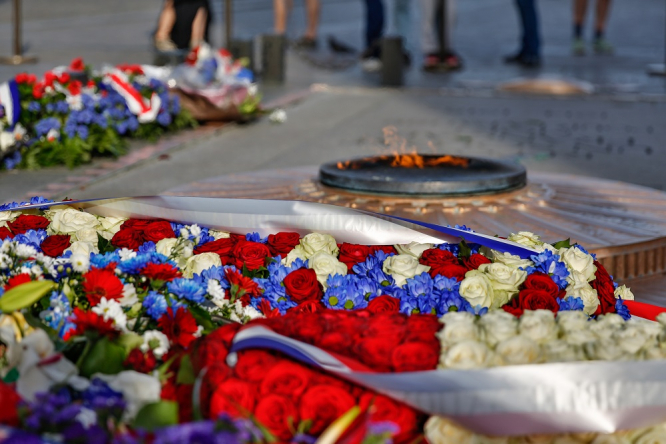 Today’s traditional VE Day commemorations on the Champs-Elysées will be in a pared-down format, without the usual parade along the avenue and the inspection of troops by the president.

There will also be no spectators stands at the Place de l’Etoile. Instead President Macron has invited the public to mark the occasion by putting out Tricolore flags at their windows today.

Due to the fact lockdown is still in place, President Macron will carry out the formalities accompanied only by a small group of other dignitaries, including his predecessors François Hollande and Nicolas Sarkozy, the presidents of the National Assembly and Senate, Minister of the Armies Florence Parly and Paris mayor Anne Hidalgo.

The military will be represented by a few of its top-graded officers, including Chief of Defence François Lecointre.

The commemoration will start at 10.45 with the president laying a wreath at the statue of General de Gaulle towards the southern end of the Champs-Elysées, followed by a ceremony under the Arc de Triomphe, at the top of the avenue, where he will lay a wreath at the Tomb of the Unknown Solidier, and revive the flame.

The latter involves using a ceremonial sword to reopen an air vent to keep the perpetual flame burning.

President Macron had initially been expected to visit Moscow this year to mark the anniversary, however the victory parade has been cancelled there due to the epidemic.

The formal surrender of the Third Reich to the Allies on May 8, 1945 marked the end of the Second World War in Europe and the start of 75 years of peace.

In the UK many public ceremonies and parades have been cancelled, with people invited to mark the day at home.

A message from the Queen will be broadcast tonight at 22:00 French time.

On the occasion of the anniversary, Dame Vera Lynn, famous for her wartime songs that inspired the troops, passed on a message of encouragement to Connexion readers in France (see article here).