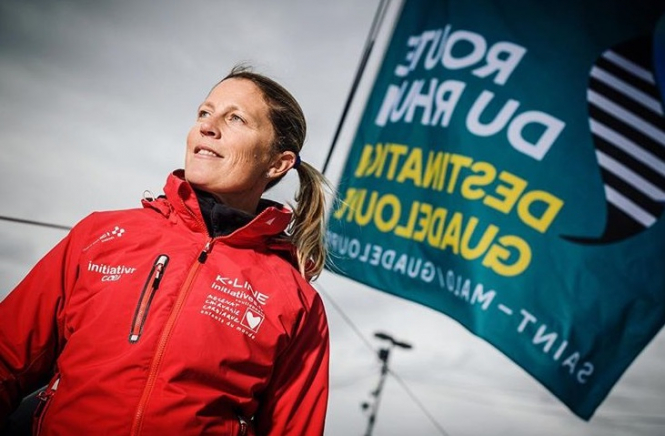 Ms Davies - a Briton who now lives in Trégunc with her professional sailing skipper partner Romain Attanasio - will be skippering one of the 124 sailing boats to race from Saint-Malo to the French Caribbean island of Guadeloupe, in the 40th anniversary edition of the prestigious event.

Ms Davies will be racing in support of the charity, Mécénat Chirurgie Cardiaque, with charitable organisation Initiatives-Coeur.

The charity raises money to enable children with severe heart defects to be operated on in France, in the event that an operation would be impossible in their own country for technical or financial reasons.

Ms Davies is also raising money for her cause via Facebook, with each social media "Like" of the official Page or each new Instagram follower adding an extra €1 to the total.

The Route du Rhum is one of the most popular high-level sailing races in France, and started in 1978. It takes place every four years, and is a solo race (meaning each skipper is sailing alone).

This year marks 40 years of the competition, and will include boats at least 39 feet (11.8 metres) long, split into six classes, depending on style and size of the vessel.

Ms Davies, who was born in Plymouth and whose father was a submarine commander, has a long history of competitive sailing, and is one of just six female skippers taking part in the race this year.

She did her first round-the-world crewed race aged just 24, in 1998, and has taken part in a demanding sailing competition almost every year since 2001.

She won fourth place in the prestigious Vendée Globe race in 2008-2009, coming in just 1 hour 20 minutes behind respected French sailor Marc Guillemot (who was himself a regular participant in the Route du Rhum).

Ms Davies - who has taken part in more than 25 transatlantic races in total - also came in sixth place in the Volvo Ocean Race in 2014-15, as skipper of an all-female crew.

Most recently, in 2017, she came in sixth in the Transat Jacques Vabre race, alongside Tanguy de Lamotte, while also raising money for charity (and came in fifth in the same race in 2015).

This year, Ms Davies travelled to Burundi with Initiatives-Coeur, in a humanitarian mission to examine 120 children in possible need of heart treatment.