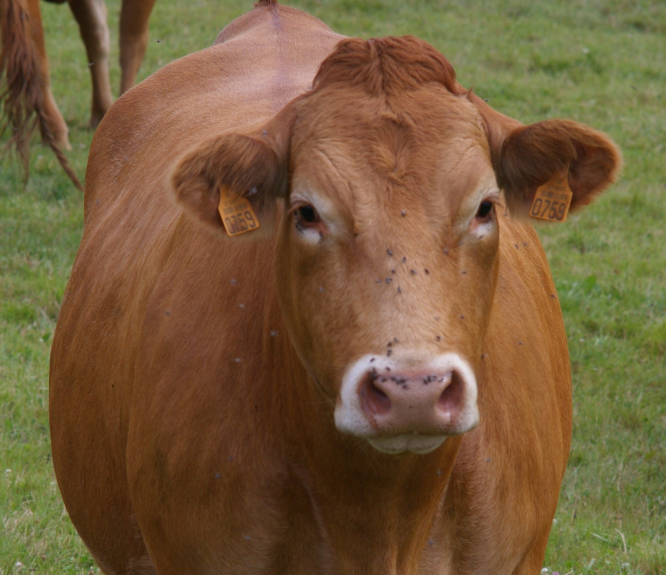 The sale of a year-old Limousin heifer for a record 250,000 guineas (nearly €300,000) at auction in Carlisle was greeted with surprise in France - along with a warning that the reality for most cattle farmers in the country is far from luxury.

The heifer, called Wilodge Poshspice, was put up for auction after her breeder, Christine Williams decided to reduce the size of her herd.

Managing director of Harrison and Heatherington auctioneers, which handled the sale, Scott Donaldson told The Connexion a combination of factors led to the exceptional price.

“Firstly there has been a general trend in the last five to 10 years for female cows to sell more than bulls due to the advance of technology which allows embryos to be harvested and sold," he said.

“Then there was the fact that it is rare for a herd of very good pedigree cattle, built up over the years, to be sold like this which generated interest.

“On the day of the auction two big breeders agreed to combine their resources to bid, which meant they had the cash, and then there was the surprise entry of a new Irish bidder, who is starting a pedigree herd from scratch and was determined to get the best - and the result was the price we had.”

It's a quirky tradition that auctioneers today still sell cattle - and horses - in guineas, but the buyer pays in pounds. In old money a guinea was 21 shillings, worth £1 and 5p. The extra shilling was the auctioneer's commission, although today they earn more.

Poshspice has now been moved to a farm in Cheshire where her new owners, the breeders who joined in a partnership to buy her, are waiting to see if she is fertile.

News of the auction provoked some French farmers to warn that their reality, of work seven days a week and little chance of gaining a salary some months, was totally removed from the prices paid by some pedigree breeders.

In France very few farmers combine commercial farming with pedigree herds, while in the UK it is common for successful commercial farmers to keep pedigree cattle as a hobby.

“It is wrong to say that we in France are angry at the price,” Olivier Rambert, who handles international sales for Interlim Génétique Service, the company which runs sales for the Congrès International Limousin, based in Boisseuil near Limoges.

“It is more that we want the public to understand that the price is 200 times more than a best-of-breed Limousin cow would sell for in France. It has nothing to do with the realities of the commercial market where French livestock farmers are really struggling at the moment.”

At the last major Limousin pure-breed auction in France, held last September, the average price was €4,493 for cows and €7,800 for bulls. The highest price was €10,200 for a bull called Maestro.

Steers (castrated bulls sold usually at around 18 months) sell for a little more.

“It is far removed from the pedigree sales, where the owners of this heifer will never get their money back, but will have the fame which goes with her, and a strong base to breed their herd further,” he said.

“We are very happy for the seller, for the new owners and for the Limousin breed because it has got people talking about its many merits, but again, we need to tell people this is nothing to do with French commercial livestock farming.”

Limousin cattle were first mentioned as a breed in the 17th century when oxen (castrated adult males) of the breed, were prized as draught animals for drawing carts or ploughs.

Their name comes from the region in the foothills of the Massif Central, centred on the modern departments of Haute Vienne, Creuse and Corrèze.

A herd book (a register of pedigree cattle) was established in 1886 but with increased mechanisation of farms, the breed declined sharply until the 1960s, when it came back into fashion for beef farming.

It proved to be very popular in France and abroad because the cattle, which are relatively small, are very hardy and can spend winters outside most years.
The meat is fine grained, usually tender, and delicately flavoured and is best fried, grilled or stewed. English and Scottish breeds, like Aberdeen Angus or Herefords, with their stronger flavour and more fatty muscle, are better roasted.