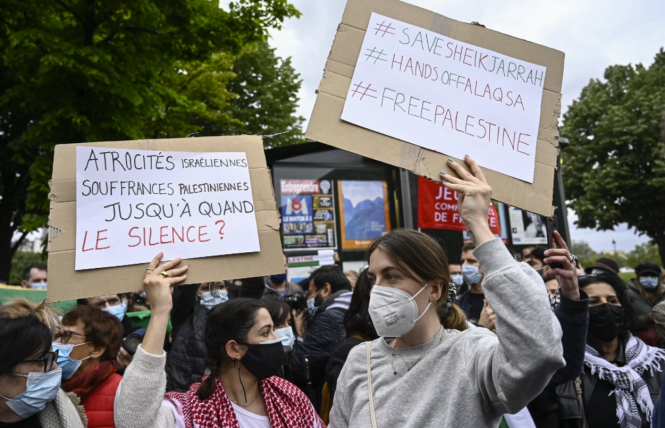 Around 22,000 people in 60 towns across France took part in pro-Palestine protests yesterday (May 15), including 2,500-3,000 people in Paris, despite the police prefecture having banned the gathering.

Most of the protests took place peacefully. Police made 51 arrests, of which 44 were in Paris.

By the end of the day, 15 people were still in police custody, in connection with “participating in a group intending to commit violence”, “participation in a gathering despite being given a warning”, and “violence against law enforcement officers”.

In Paris, the police prefecture banned the gathering, but this did not stop protesters from assembling. The last of the demonstration was dispersed by police just after 19:00, with 367 people fined, the Interior minister said.

The police prefecture said that 4,200 police officers and gendarmerie were mobilised to “systematically and immediately disperse” any protesters who attempted to gather.

Previously, protesters in the 18th arrondissement had attempted to start a march, but law enforcement officers on the scene stopped them, causing a sometimes-tense clash between officers and the public.

Water cannons were used to disperse protesters, including in the boulevard de la Chappelle, in the 18th arrondissement.

Interior Minister Gérald Darmanin thanked the officers at the scene.

The protests were organised by the pro-Palestinian group, l’Association des Palestiniens en Ile-de-France, and supported by around 30 other organisations, including Attac, Action Antifasciste Paris-Banlieue, and the Nouveau Parti Anticapitaliste.

One protester, Christophe Baudet, from the 19th arrondissement in Paris, told Le Monde: “I came precisely because [Interior Minister Gérald] Darmanin and the [far-right party] le Rassemblement National want to paint all of us protesters as anti-Semites.

“It is abominable to use anti-Semitism in this way. Being against colonisation and the far-right government in Israel is not anti-Semitism.”

One woman, a member of the charity Un nouveau visage, which funds projects for Syrian refugees in Lebanon, and Palestinians in the West Bank and Gaza, spoke out against the prefecture’s choice to ban the gathering.

She said: “I am shocked that France is the only Western country where it is forbidden to demonstrate in solidarity with the Palestinians.”

Another protester added: “We are not here to make trouble, we are here to show our solidarity with the Palestinians, because the government is condemning bombing by Hamas but not by Israel.”

Yet another said: “France says that it is indignant and surprised, but does nothing. Macron says that Israel has the right to defend itself, but the Palestinians also have that right."

In Strasbourg, 19 associations joined together to march peacefully, and organisers repeatedly said that “any anti-semitic slogans will not be tolerated”. Most wore masks, and carried pro-Palestine banners, and flags.

Similar movements took place in other countries too, including in London, UK, where thousands gathered. Organisers said: “It is essential that the British government take immediate action.” They described Israel’s actions as “war crimes”.

In Madrid, Spain, around 2,500 protesters marched peacefully; and several thousand took part in demonstrations in Berlin, Germany; Milan, Italy; and Washington DC, US.

It comes after the situation in Israel and Gaza has worsened in recent days. More than 139 Palestinians have died in the clashes. In Israel, nine people have died, including one child.