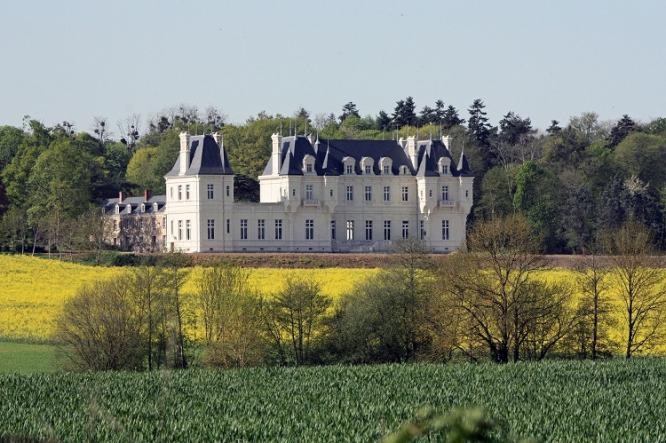 Their departure has shaken the budding tourist industry of Bourg-d’Iré, in Maine-et-Loire.

The chateau is now for sale and an offer to leave it to the village is unlikely to happen.

Property developer millionaires David and William O’Neil saw the 17th century 100-room Château de Falloux on the edge of the village when it was in a run-down condition.

They were interested in buying it to live a long-held dream of retiring to France but were put off when they heard of proposals to build three wind turbines nearby.

After speaking to the council, which then voted against the project, and seeing the plan withdrawn, they went ahead, purchasing it for €500,000 and spending a further €6million on restoration.

The work was completed in late 2016 – but two years later the couple discovered a new project to install four turbines, 150 metres tall, had the support of some people in the village.

The commune had by then been expanded to combine with neighbouring communes and a majority of councillors are said to be in favour of the project.

Charles Appleton, a good friend of the O’Neils, said: “They were furious and feel some people seemingly plotted this behind their backs.

“Contacts they had developed in China and elsewhere with agencies to have weddings at the chateau fell through – no one wants a romantic wedding in a French chateau with huge wind turbines in the photos.

“They always said they would leave the chateau to the village, fully restored and with a business to pay for maintenance, when they died. Obviously, that will not now happen.”

Mr Appleton and wife Christine had a holiday home in the village for 17 years before moving across full-time and buying the Manoir de la Vieille Douve – halfway between the chateau and the village’s second chateau Château de La Douve.

They were the first people in the village to meet the O’Neils when they stayed at their B&B to look at the chateau, and built their friendship over the years.

The restoration and plans for weddings to be held there led them to invest heavily in expanding to become an upmarket B&B, with an indoor pool to cater for wedding guests.

“David and William spoke to everyone they could, and even wrote to President Macron, but the commune grouping seems set on the project, so they put the chateau on the market and left,” said Mr Appleton.

It was put up for sale for €3.7m. A German is said to be interested for a private home.

The Appletons are waiting to see what will happen and are part of a group opposed to the turbine project which has published a film about the village on YouTube.

Mr Appleton said: “I do not see this commune ever being able to attract tourists and other visitors with these giant turbines. It is sad because it has divided the village, sometimes even families.”

Sonia Renault, a deputy mayor in Bourg-d’Iré said the new turbine plan was threatening a project to keep the village alive through tourism.

“All our efforts, tidying the village, entering the Villes Fleuris competitions, and pushing the idea of sustainable development, encouraging tourist businesses, count for nothing,” she said.

“We were pesticide-free years before it was compulsory for the maintenance of our village and even use sheep instead of mowers in the village park.

“There is nothing sustainable about these turbine projects – they are driven by greed and ambition from people who will not live with them all the time.”

Sylvain Maurer, project manager for Groupe Syscom which is pushing the project, said the departure of the O’Neils, and the campaign by opponents to the turbines, disguised the fact that there was support from locals for the plan.

He said: “Obviously, it will be silly for us to go where the locals do not want us, which is why in 2013 we presented our project to Bourg-d’Iré and the local council voted in favour.

“That was reversed as a result of protests by the O’Neils, but we changed the project slightly and presented it again in June 2019, bearing in mind that the renovation of the chateau had been completed. The new project will have less impact on it.”

He said most people recognised that wind was a valuable, renewable energy source and that the taxes from the turbines would help the commune.

The site chosen was behind a ridge and a wood from the chateau, so only the tips of the turbines would be seen from there and nothing at all from the gardens, where wedding photos would be taken, said Mr Maurer.

“To sell such a property is not easy, it takes some time,” he said. “Everything went very fast from our announcement of the new project in June: the listing of the chateau with estate agents in August, and the new buyer potentially arriving in late 2019.

“It seems strange that the ‘dream of a lifetime’ should so rapidly come to an end for a turbine project they still have the legal means to protest about.”

The company is finishing environmental studies and a public inquiry into the project is expected to start next year.

If the project is approved, the first masts for the turbines will be put up in 2022, and production of electricity will start in 2023 for a design life of 20 years.

The O’Neils were travelling by yacht back to the US and asked the chateau events manager Jean Luard to reply to Connexion on their behalf.

Mr Luard said: “After their first fight in 2016, they were so shocked when the project came back. If they had stayed they felt the fight would have turned their lives upside down, and even if they won at the public inquiry, it might come back in six years.”