Some see just caves in a cliff-face... 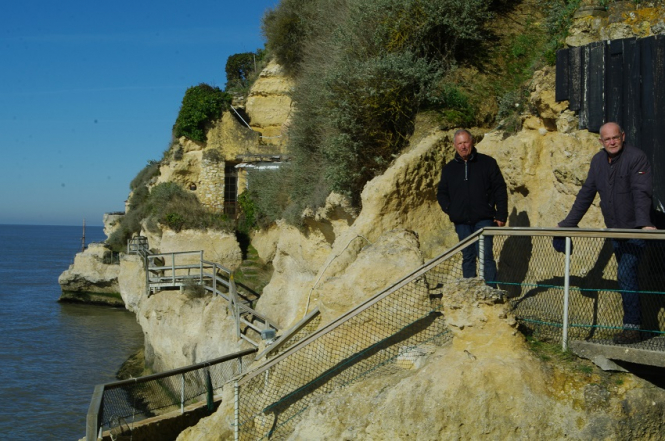 Rooms with a view...Henri Carton (left) and Yves Rodier outside the caves
By Brian McCulloch

Cave houses, known as maisons troglodytes, are found in many areas of France – but few can be as stunning as those near the mouth of the Gironde estuary.

Carved out of fossil-rich limestone, a couple of metres from the high-tide mark, they have been used by humans for thousands of years.

In the past, the caves at Meschers were refuges for Protestants during the wars of religion, and hiding places for salt when a fierce tax, the gabelle, was imposed.

What is now the Charente-Maritime department was one of the main producers of sea-salt, and silos cut into the floors of the cave houses allowed it to be stocked out of sight of customs officers, to be loaded on to boats during dark nights.

Caves were also used as homes for people who could not afford to live on the top of the cliff or in the sheltered area around the harbour.

Accessible from paths cut into the soft chalk rock, some maisons troglodytes are little more than cool places to shelter in the summer, while looking over the estuary and dipping a fishing line in the water.

Others have been turned into stunning houses, complete with electricity, water and plumbing.

Henri Carton, a retired baker, said:  “When we bought the property, the path down to the caves was in a poor condition, the entrance covered in brambles and a fox was living in the cave. But the view was stunning and, having been brought up in the town, I knew the potential.”

Local builders did the main work in the conversion, updating the electricity, putting in water and a sewerage system which pumps waste water up to the top. They also poured decorative concrete patios and stairs.

The builders used a crane over the cliff to move material down, and a cement pump – more often used to build skyscrapers – to get the cement for the terrace. Mr Carton did all the woodwork in the house.

A local locksmith turned out stainless steel banisters and other fittings for the path down to the cave, and then Mr Carton planted a prickly pear and aloes on the cliff face to remind him of Madagascar, where he spent many holidays game fishing.

The result is a two-level maisonette, with one bedroom, two toilets and showers, a lounge, a large dining room and two kitchen spaces.

The absence of sharp corners to the rooms helps the welcoming atmosphere, and both levels have terraces with views over the estuary.

A carrelet fishing net hangs over the patio, ready to be dipped into the estuary. It is electrically operated to save Mr Carton’s back.

Mr Carton and his wife spend the summers in their cave house, renting out their bungalow “on the surface” to holidaymakers.

“It is very agreeable, very quiet and it stays cool, without getting too cold,” he said. “There is one leak when it rains, but after all, it is a cave.”

The honey-coloured stone reflects the light from the sun and water, meaning that electric lights do not need to be switched on all the time.

Carefully preserved in the dining room is a baptismal font carved into the rock, which was used when the caves served as secret places of worship for protestants. Neighbour Yves Rodier, a businessman who makes fishing and angling equipment, has left his cave houses relatively undeveloped, and the path down is uneven in places.

They have electricity and water but he has left them with their original floor and decorated them like fishing cabins. Two salt silos, each two metres deep, have been left open.

“It is our own little secret paradise in the summer,” he said.

The houses at the top all have stunning views over the estuary, and Mr Rodier and Mr Carton said they were not sure if having the caves added very much to the value.

“Some people love them and will probably pay millions, while others look at all the steps going down and just see problems,” said Mr Carton.

“The previous owners of our cave were not interested, for example. But for us it is very special indeed.”

Other areas with maisons troglodytes include the Loire valley, where cookery writer Jane Grigson had one as a holiday home, northern Dordogne and Bas Rhin.