Protests against Amazon warehouses across France 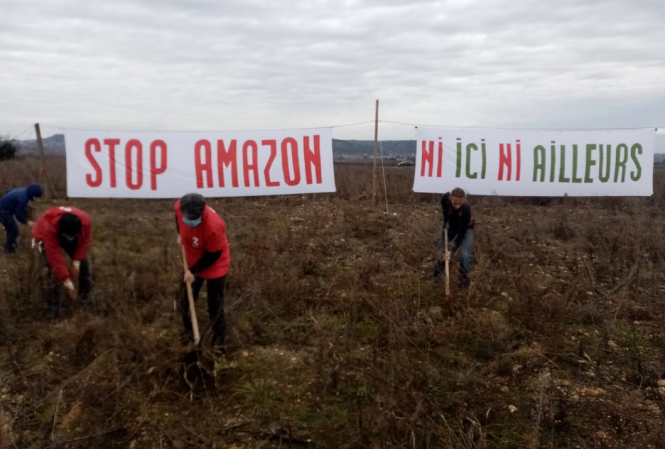 Protests against online retail giant Amazon took place across France yesterday, as protesters formed “human chains” and planted trees in a bid to show their opposition to the firm.

One major protest included around 800-1,000 protesters in the commune of Fournès, Gard, Occitanie, who lined up to spell out the words “Amazon, non” yesterday, in a move against the planned construction of a new 38,000 m2 sorting warehouse in the area.

The proposed site is less than five kilometres from the famous tourist attraction, Roman aqueduct bridge the pont du Gard.

The protesters chanted: “Amazon, not here, not elsewhere”, waved flags, and held up a large banner reading “Stop Amazon”. They also held balloons 18 metres tall, to show the planned height of the warehouse - equivalent to a five storey building.

One protester told news service FranceInfo: “We are against this project; we find that it is an ecological and economic aberration, because it is killing small businesses.”

Another explained why the protesters had planted trees on the site. “It will cause an obstacle for the warehouse, because they cannot build where there are trees.”

A local beekeeper has also said there is a risk that the warehouse could disrupt land that his bees usually visit.

Raphaël Pradeau, national spokesperson for environmental justice campaigners Attac, who was at the protest, told the Agence France-Presse: “These citizens of Fournès have been fighting against the construction of a huge Amazon warehouse. At the beginning they were a little bit alone, but little by little, the fight has grown.

“With other national associations, we have coordinated different local fights against Amazon projects.”

Protests against Amazon also took place in other towns, including Metz, Quimper, and Rouen.

Mr Pradeau said: “We want to show that we are not little isolated protests. We can mobilise hundreds of people, who are ready to come back to the site to stop the work.”

One protester in Fournès, Sarah Latour, who lives in Ardèche and has two children, helped to protest and plant trees on the land.

She said: “These plants, these trees, which we are planting today, are a symbol of life compared to the tarmacking that Amazon practices. I have come here with my children because I do not want this damaging model for them.”

According to plans, the new warehouse in the Gard is set to sit on a 14-hectare area of land, and planning permission has reportedly been granted - although several citizen administrative protests are still seeking to block the work.

Opponents say that Amazon destroys local jobs, operates with poor working conditions, and has a negative impact on the climate.

Amazon France has neither confirmed nor denied its plans to build the warehouse on the Gard site, but has defended itself against the protests.

Julie Valette, spokesperson for Amazon France, said: “We are really careful to be good neighbours, and to integrate harmoniously everywhere that we operate. If you ask businesses around sites where we are [already], or local MPs and workers, you will see that is true.”