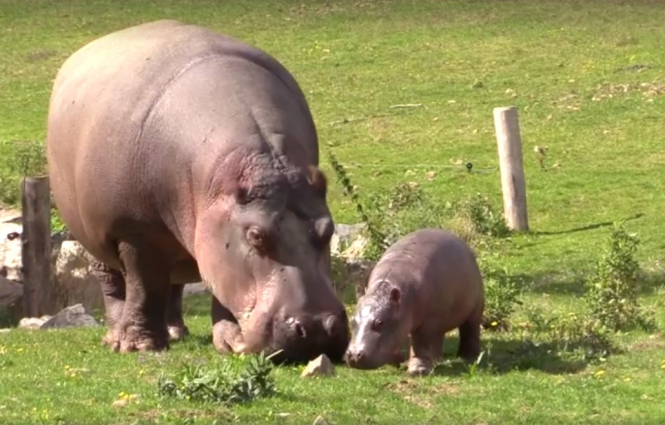 The baby is said to be familiarising itself with the park, but always stays very close to its mother
By Connexion journalist

The baby was born at the animal park on September 1, but the poll to decide his name has only just been opened, as reported in French news source 20 Minutes.

The birth has been described as an exceptionally important event, given that the hippo species is endangered, with the baby the only one of its kind to be born in a French zoo this year.

Over 500 people have voted so far on the Facebook poll (below), which is asking members of the public to choose a name for the little one.

Although the park’s keepers have not yet confirmed the hippo’s gender, the name options are Synock, Marty, Many, Matibrie and Poshassa, which bear some similarity to those of the baby’s parents, Kinshasa and Popo.

The birth of the hippo comes as part of a concentrated effort of the part of the park to encourage breeding of its animals, and although there has only been one baby hippo, many other species have also welcomed new arrivals.

“There has been a real push by the team to ensure that there are many births this season,” explained Vincent Lantheaume, animal manager at the park, speaking to 20 Minutes. “The climate conditions are better, and the females are burning less fat [at this time of year].”