Public letter writers for hire still have a role 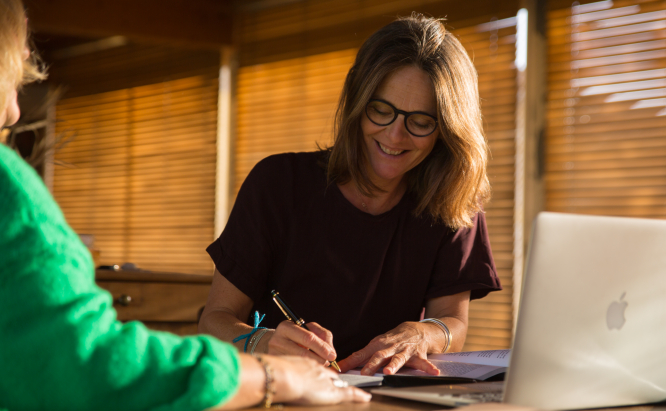 Even in this internet age, where a little searching can find templates for anything from applying to be an astronaut to writing the ideal profile for a matchmaking website, the écrivain public has a role. Marie Huguenin-Dezot (pictured), who works from home near Bordeaux. said: “We see all sorts of people, of all ages and of all social classes. It is a job where there is no government regulation, although there is an association which an écrivain public can join, with a strict code of practice.”

Ms Huguenin-Dezot is a voluntary board member of the association Académie des Écrivains Publics de France, which has around 140 members. She came to the role after a career in corporate communication in Paris. “I wasn’t enjoying the work and so decided to do something completely different,” she said. “I realised I was really missing human contact in my work and that led me to becoming an écrivain public.” She studied French and communication at university and loves the nuances of French. She says it is the human touch which means the role is in demand. “Take someone who is applying for a job and comes to us for help writing a letter to go with his or her CV,” she said. “There are many models online they could copy but recruiters know that and are on the look-out. By putting ideas down on paper and then going to an écrivain public, the candidate will get a letter in their own voice, which will match the picture at interview.”

Ms Huguenin-Dezot divides her work into four categories: correction and writing or rewriting, including letters, speeches and press releases; biographies and memoirs; editing; and teaching writing workshops. Each has its specific skills – some of her clients, for example, get help with school or university essays and theses. “We cannot do the work for students,” she said. “But we can correct spelling and grammar, and rewrite a sentence so its meaning is clear.”

For letters, many are for people dealing with the administration. “People often feel intimidated when writing to the authorities, and come to us. We are not lawyers and cannot give legal advice but if someone wants to contest a fine, for example, we will write a good letter with the details they give us.” The écrivain public’s name does not appear on the letter. “We work in the shadows,” said Ms Huguenin-Dezot. Some letters are personal, often dealing with emotionally charged subjects where clients feel unable to express themselves on paper as they would like. And, yes, she has once been asked to write a love letter, or, rather, a declaration of love. “It worked and they are happy,” she said. She has not had any English-speakers using her services but clients often include people from other francophone countries, some of which have the same écrivain public tradition.

The history behind écrivains publics

Historically, écrivains publics in France developed before the Revolution, when literacy levels were low, even among the aristocracy. Earliest records show most were monks or other church officials. After the Revolution, business boomed until the introduction of universal education under Jules Ferry in 1881, which raised literacy standards. Even so, the profession continued, reflecting the fact that many left school feeling ill-equipped with literacy skills.

In the early 1980s, there was a raised consciousness about illiteracy, which also led to a higher profile for écrivains publics, which has continued to this day. The writing of biographies and memoirs is another speciality of écrivains publics. These are usually based on interviews and then written up by people who want to leave a physical trace for their families to remember them by. Some are published and put on sale, although most are produced in limited numbers for the family.

By contrast, the writing workshops organised by Ms Huguenin-Dezot are run to enable people to learn how to express themselves on paper. “Sometimes people are so intimidated by grammar rules and spelling that they feel they cannot write, so the work is to liberate them from that,” she said.