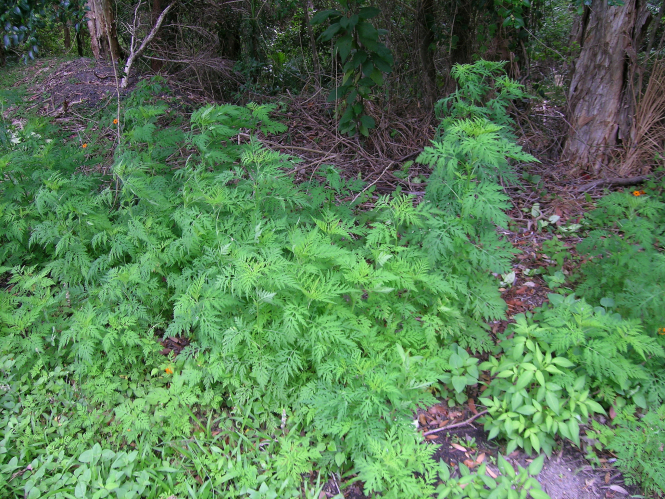 Ragweed, or in French l’ambroisie, is an invasive plant that provokes allergic reactions in people which can sometimes be quite intense.

It produces a massive quantity of pollen which can cause runny noses, itchy eyes or even asthma or eczema.

According to the regional health association (ARS), it costs the Auvergne-Rhône-Alpes region, which is the most affected by the pollen, around €40 million per year. This includes the cost of medical consultations, treatments, days of leave from work etc.

Approximately 6 - 12% of the population exposed to the plant’s pollen are allergic to it, according to the website Signalement Ambroisie, which was set up in 2014 to allow individuals to alert authorities to areas where the plant is growing so that they can destroy it.

According to the website, the plant has been spreading in France for 20 years.

“It is in full expansion and has colonised a large part of France,” the website states.

This year, the Réseau National de Surveillance Aérobiologique (RNSA), an association that monitors pollen and mould spores in France, is predicting 2020 to be a bad year for those allergic to ragweed pollen.

“For the past two weeks in particular, the mild, sunny weather has favoured the emergence of high concentrations of grass pollen in the air,” the association wrote in a press release published in early July.

“In 2020, long periods of sunshine in April and May, combined with dry and windy weather, has resulted in widespread emissions of pollen in the air.”

Ragweed first begins to grow in around April or May, but generally does not start to release pollen until August. The peak pollination period is usually the middle of August and can last into September or sometimes October.

The RNSA has published a list of recommendations for people allergic to the pollen to follow, including consulting a doctor from the first sign of symptoms, washing your hair in the evening to get rid of any pollen spores, and limiting the time you spend outside to the start and end of the day, when the pollen is less present in the air.

In a report published by the RNSA in 2019, it called for global action to properly tackle the spread of ragweed.

“We recognise that it is very difficult, except on rare occasions and often in a limited time-frame and area, to overcome the barrier of public health administrators, local administrators and those who, in various capacities, are involved in land management,” Alberto Albertini, a member of the committee of the International Ragweed Society, wrote in the report.

“As a result, we can only rarely, and in limited areas of the territory, apply complete management [measures],” he added.

Ragweed originated in the US but is believed to have been brought over to France in cargo in the 19th century.

It was first discovered in the country in a field in the department of Allier in the Auvergne-Rhône-Alpes in 1860 and since then events such as the First World War helped it to spread, the RNSA report says.

Read more about allergies in France:

France on red alert for allergies until end of July