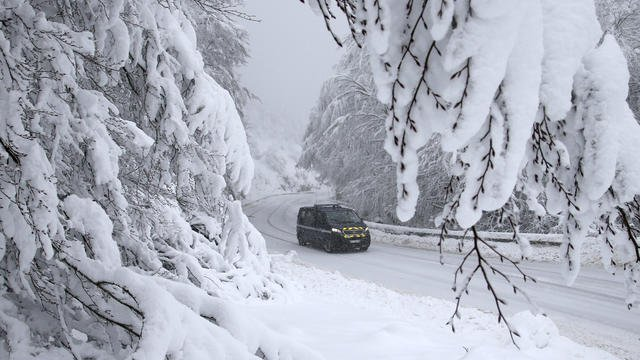 Heavy rain of up to 200mm, 1.5 metres of snow and ice, and strong winds of up to 110kph, hit last night in the Pyrénées-Orientales (Occitanie) area (Monday January 20).

Roads including the A9 motorway are closed today (Tuesday January 21), including between France and Spain from Perpignan-Nord. The RD914 between Cerbère and Banyuls is also shut, as is the RN 116.

Public transport, including commuting and school services, have also reported disruptions in Conflent, Haut Vallespir, Cerdagne and Capcir. Train company SNCF said services had been disrupted between Perpignan and Narbonne, and Perpignan and Cerbère.

More than 1,200 people are without power due to exceptionally-heavy snowfall, local news services said.

The region was on orange alert yesterday, with emergency services preparing to deal with the fallout of “very strong rain”, according to forecaster Météo France. There were also alerts for as much as 1.5 metres of snow and ice at higher altitudes, as well as warnings of flash floods and potential avalanches.

More than 390 firefighters were preparing for the storm, including 35 members of la sécurité civile, 100 from other departments. There were also 40 gendarmes getting ready on the ground, and 140 extra personnel on pre-alert. Sea and mountain rescue teams were also on alert.

So far, no major damage has been reported in the area - except for some minor mudslides - the head of the fire service said, but firefighters have warned residents to be alert to “rising water levels” as rain continues to fall.

Colonel Jean-Pierre Salles-Mazou said: “People must be careful of the risk of ‘aquaplaning’ in their car, and avoid walking next to the sea or on the banks of a river. You must be alert to the rising water, even if it appears to be gradual.”

Rain and snow is expected to continue across the region today and tomorrow, reaching the Languedoc area by Thursday January 23.

Roland Mazurie, head of Météo France in Montpellier, said: “This is an intense depression, sinking over the east of Spain. There will be a lot of rain, and an abundance of snow on the Pyrenees mountain range.”

Olivier Proust, forecaster at Météo France, told news source FranceInfo: “This is an intense Mediterranean episode, and this intensity is part of the climate of the Roussillon. But what is remarkable, is that this is happening in winter. We have to go back to January 1982 to see something similar.”

In Spain, three people are reported to have died due to the cold and strong winds, including two people succumbing to hypothermia, and one 71-year-old man having been hit by falling roof tiles after heavy snow.